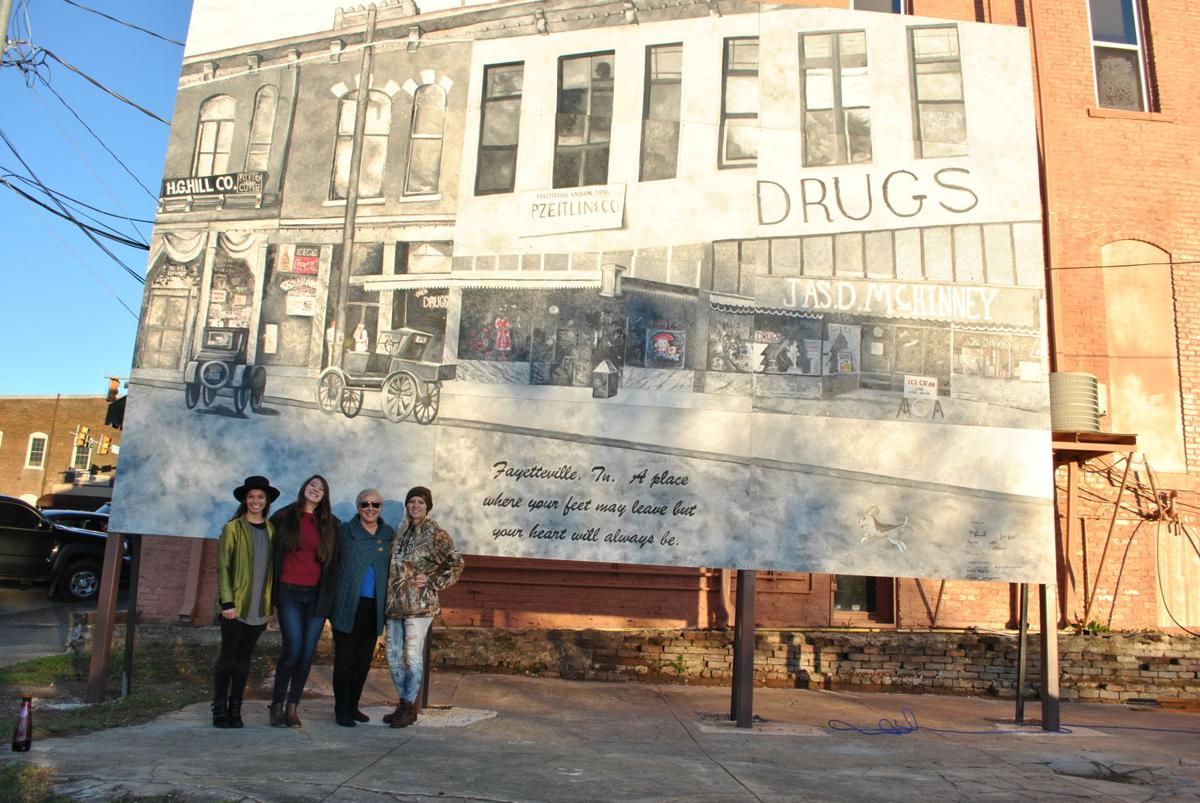 Jen King of the Fayetteville-Lincoln County Arts Center and artists Sophie Buck, Melanie Laten and Chayton Stephens at the mural revealed late Friday afternoon just off the west side of the Fayetteville square. The historical rendering is highlighted by a few touches of red. Just after being revealed, the artwork was already being used as a backdrop for photos. 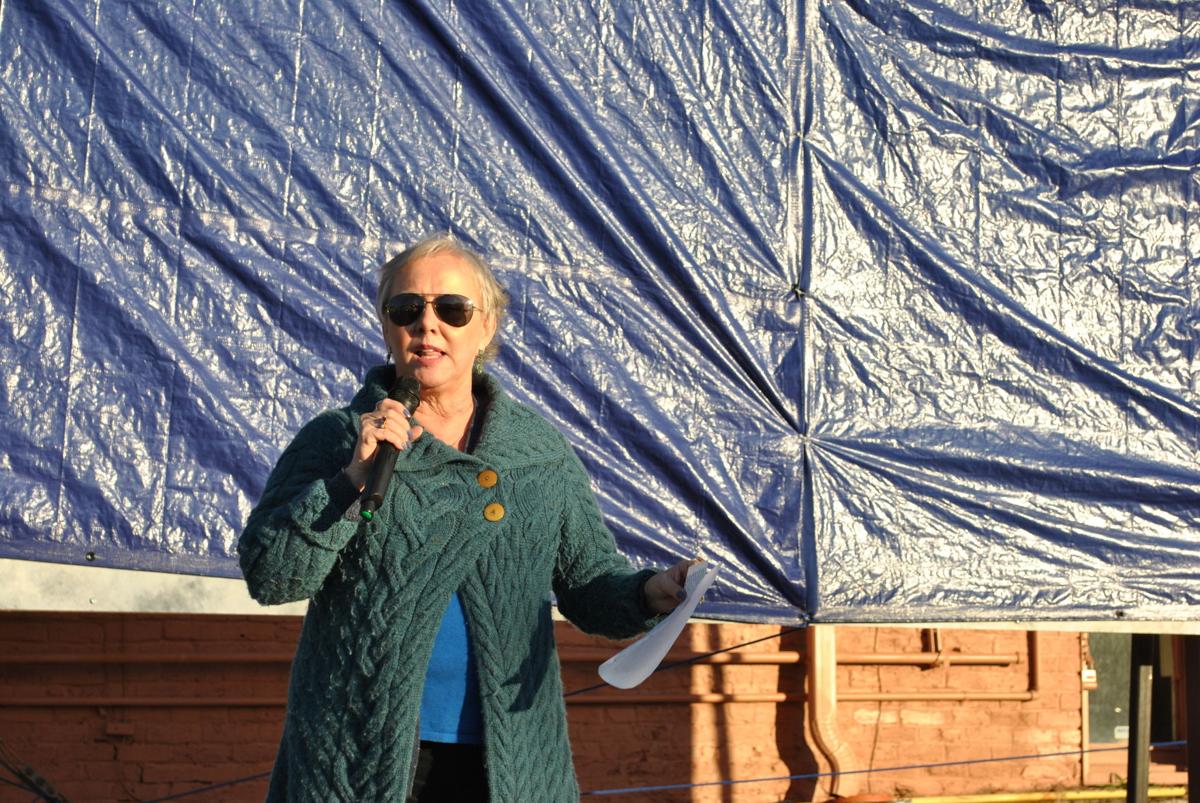 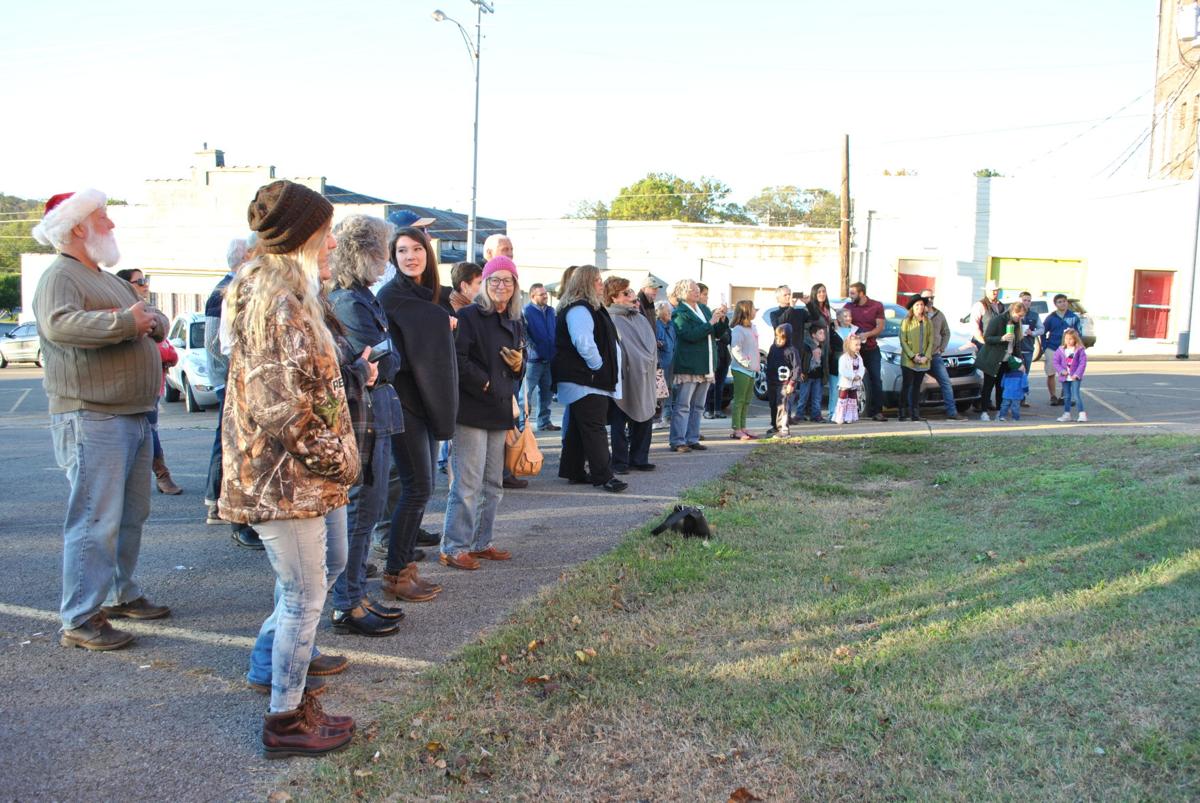 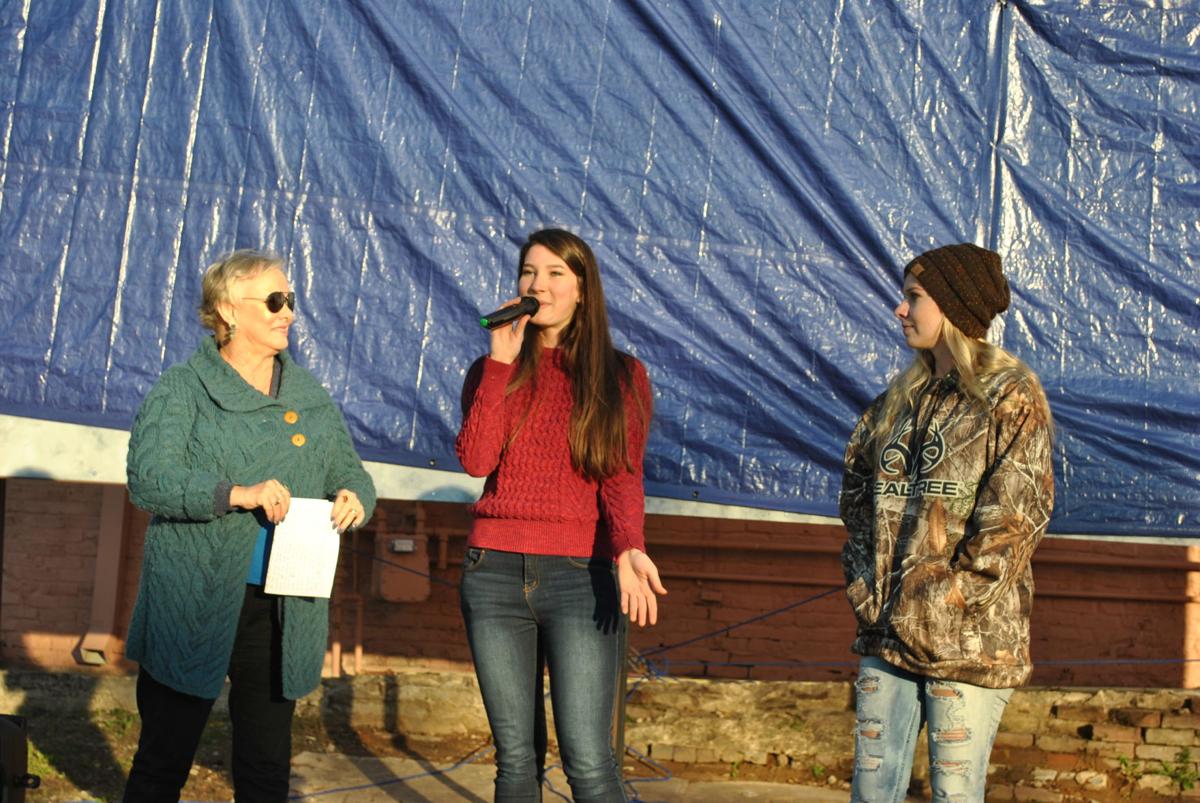 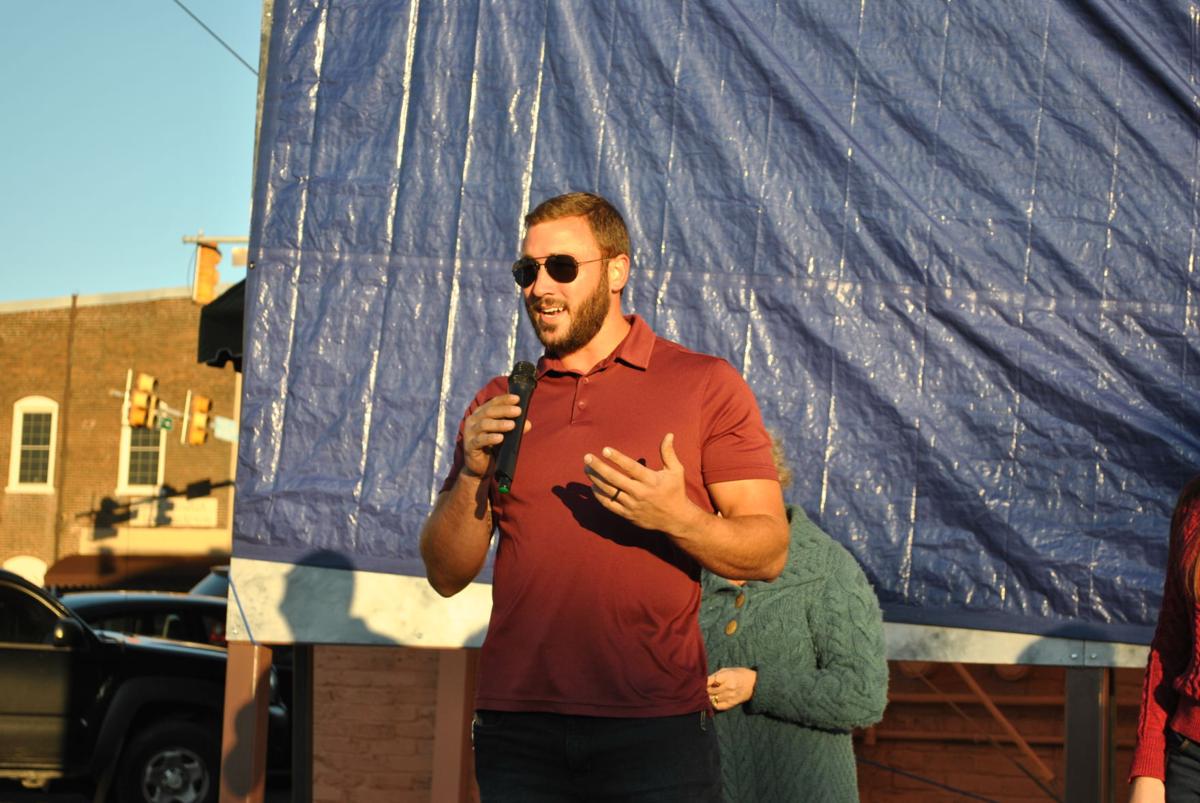 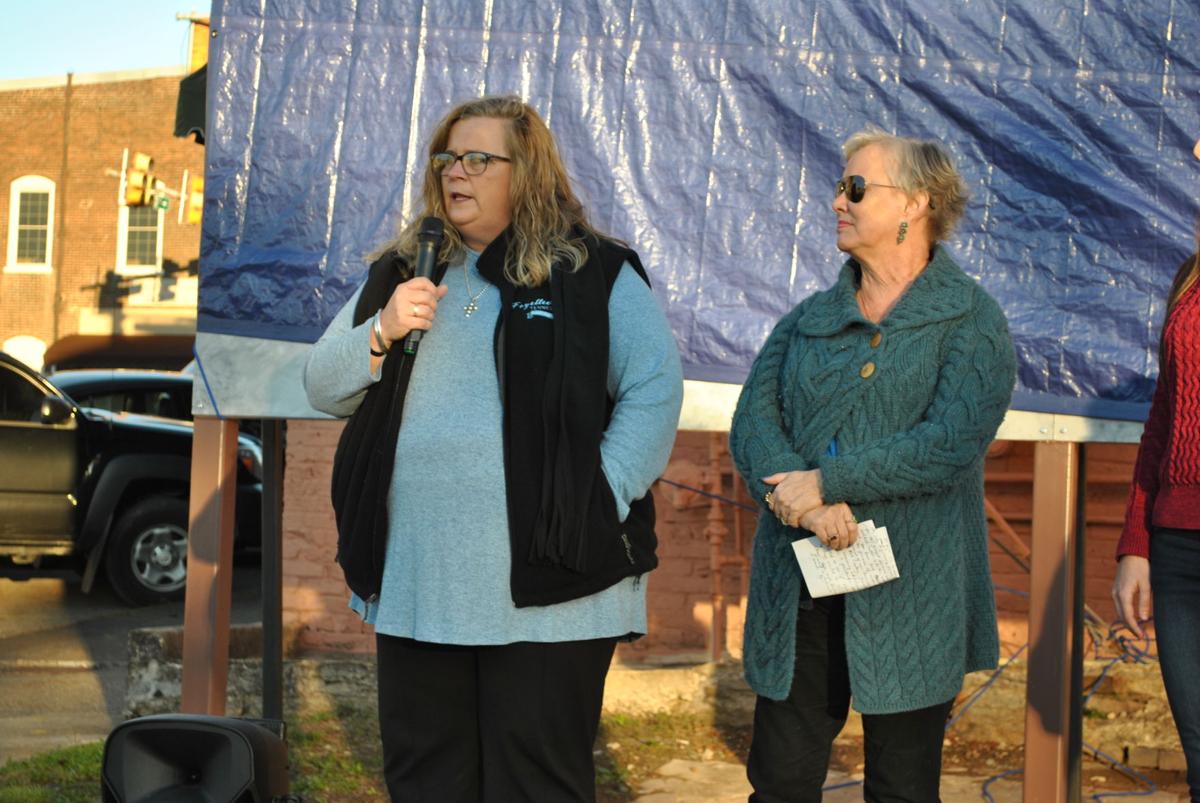 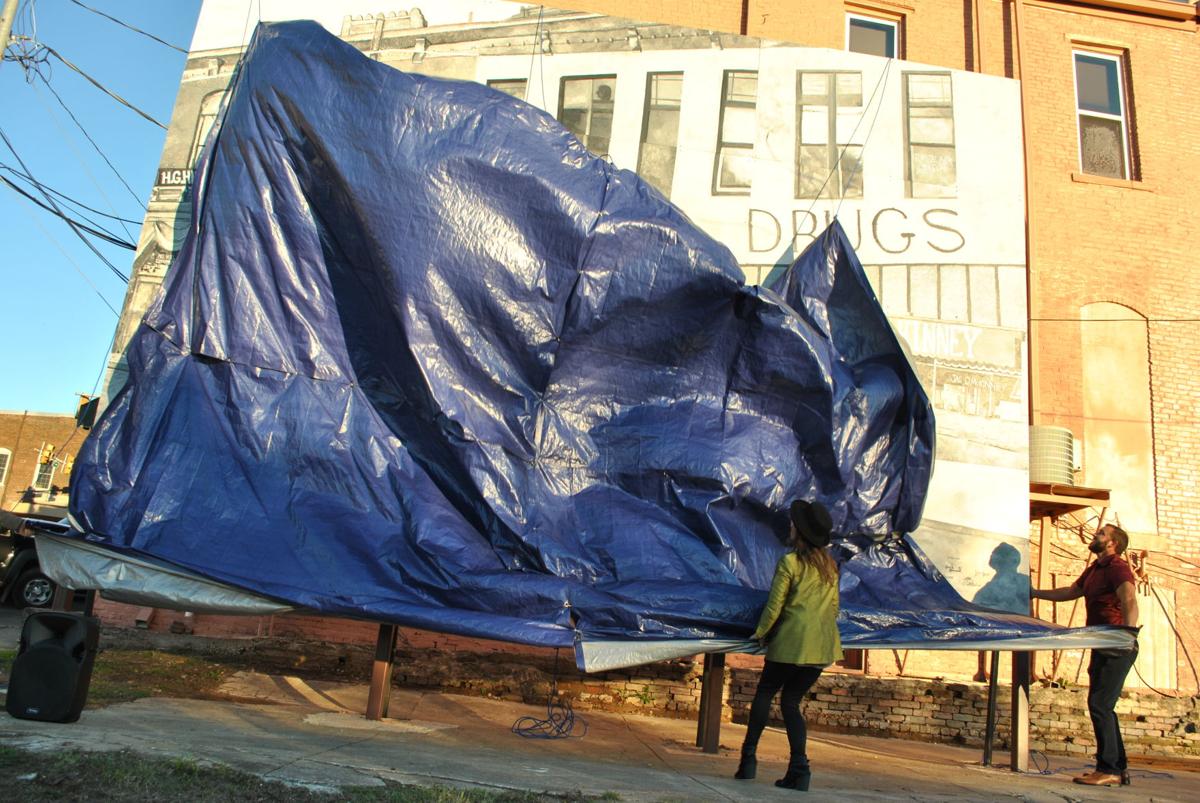 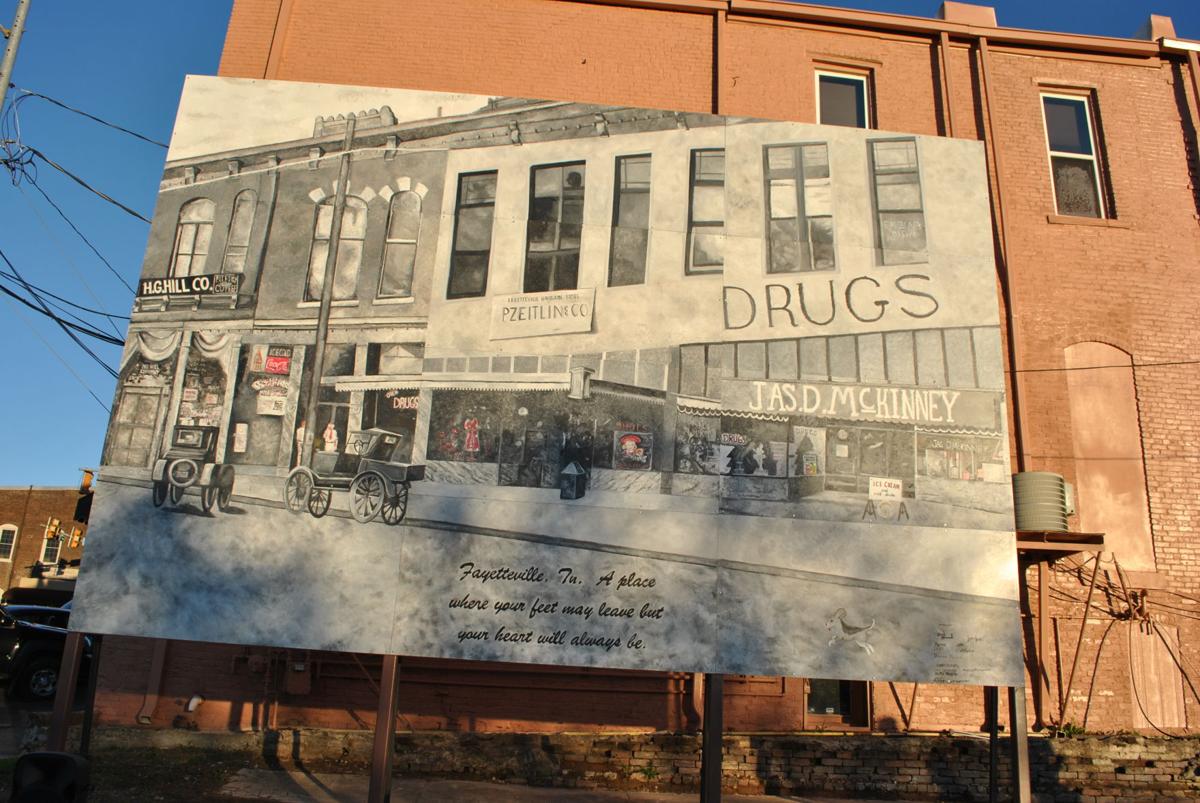 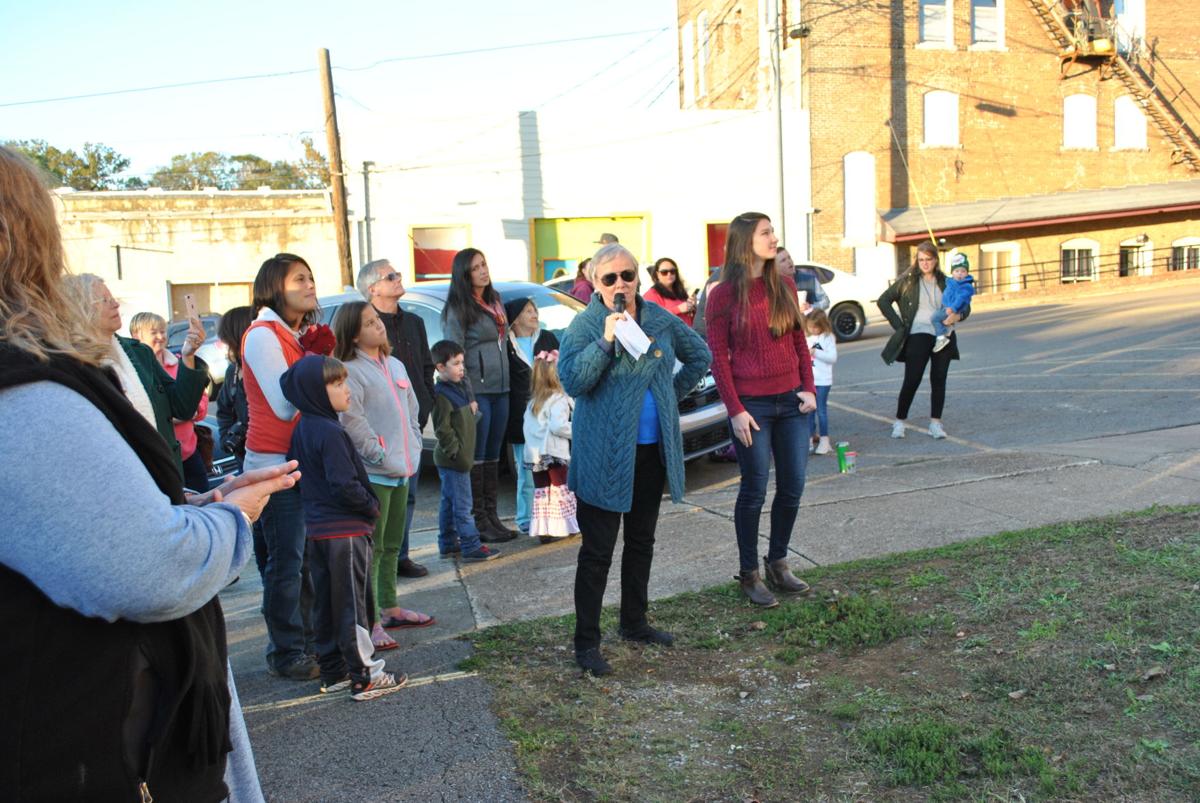 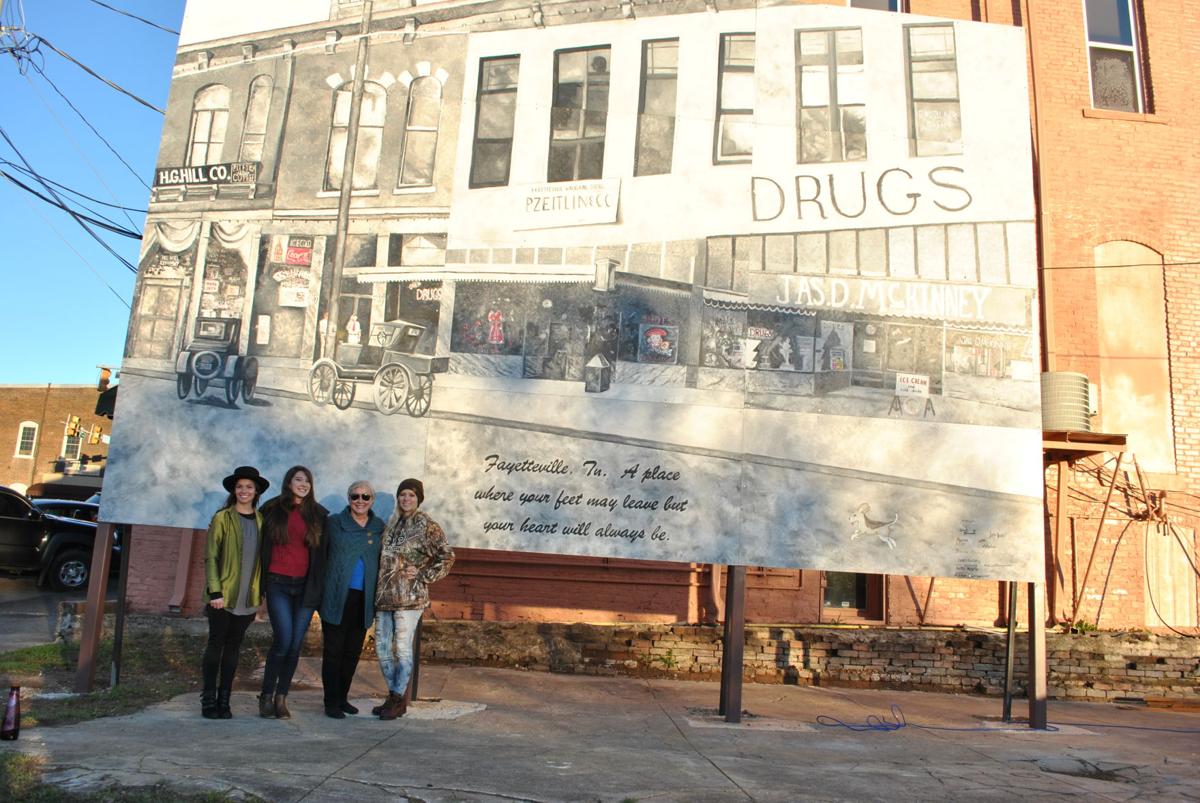 Jen King of the Fayetteville-Lincoln County Arts Center and artists Sophie Buck, Melanie Laten and Chayton Stephens at the mural revealed late Friday afternoon just off the west side of the Fayetteville square. The historical rendering is highlighted by a few touches of red. Just after being revealed, the artwork was already being used as a backdrop for photos.

A vision of Fayetteville artist Melanie Laten reached fruition Friday as the Creative Placemaking mural project was revealed before a large crowd just off the west side of the Fayetteville square.

“Except for maybe a sneak peak, this will be the first time all of the panels have been viewed together,” said Jen King, president of the Fayetteville-Lincoln County Arts Center, which took a large role in facilitating the project, as she welcomed onlookers.

“This has been a love project for me since last January,” said Laten, recalling how her plans took shape and the help of city and county leaders, as well as local artists and many others who came together to make her vision a reality. “Bill Newman invited me to his office and said we have this thing called the Creative Placemaking grant, and we’d like for you to be in charge of it.”

From there, the idea took off as Laten carried her proposal to the Fayetteville Board of Mayor and Aldermen.

“The first of my three goals was to take a very ignored, if you want to say a little bit pitiful, area of town, and basically infuse some new life into it,” she said. “The back of the west side, as most of you know, was kind of a piecemeal quilt of paint and plywood, and one of the things I wanted to do was give it a nice consistent terra cotta color.”

Also, with ductwork and other infrastructure on the backside of the buildings, Laten said she and her helpers wanted to create a freestanding mural, which was going to be a significant undertaking.

“Another goal was to make something that eluded to the early history of the west side of the square, the businesses as they were a hundred years ago,” she continued. “With that in mind, the journey began, and it’s been an interesting process because I had amazing people working with me.”

With the help of Sarah McLeod of South Central Tennessee Development District, a $6,100 Creative Placemaking grant was secured. The grant was then matched by the City of Fayetteville, which also offered the help of staffer Lenace Vaughn. Other aspects of the project then began to fall into place.

The primary artists lending their talents to the project included Sophie Buck, Chayton Stephens, and Sarah Hammel – “They worked all summer with me, while they also had full-time jobs and did other things as well,” said Laten.

Two of the young artists were on hand for the reveal, and each expressed their appreciation.

“I just want to say how grateful I am for being able to share this mural with you guys,” said Buck. “It’s been a really good experience, and I’ve learned a lot over the summer ... I just want to say a great big thank you to my community for supporting this.”

“I had a great time working on this mural,” said Stephens, adding that while she had never thought of herself as an artist, she has learned a great deal about herself throughout the process, including the need we each have to try new things in life. “I would like to thank you all for being here and supporting us – this is pretty cool.”

After the backside of the buildings was painted by Kyle Hamlin, Will Richardson undertook constructing the freestanding wall structure, a structure that went from wood to steel during the planning process.

“Thank you for coming out and for being excited about making Fayetteville a little bit better,” he said, going on to describe the strength and stability of the structure, which he also expanded to lift the murals higher. “I think it will be here for a long time ... It’s just been a huge blessing to be a part of this.”

She also noted that Leadership Lincoln’s Class of 2020 is also taking on aspects of the project, which will help the area become more of an attraction. Benches, a table and urns are planned to beautify the area and make it a nice place for people to come and enjoy, she said.

“I want to personally dedicate this to my husband, Bobby Laten, who has not been healthy enough to be able to see anything that I’ve been doing on this for the last nine months,” said Laten tearfully. “Also, I would like to dedicate it to my new twin grandsons, Walker and Wyatt.”

A countdown followed, as a large tarp was pulled from the structure, revealing the historical rendering. Laten noted that a few touches of red had been added “here and there” as artists used a little creative license in their work.

“It’s been an amazing journey, and we’re very proud to present this to the City of Fayetteville,” she said, adding that she would love to see the murals continued on other panels extending further along the backside of the buildings.