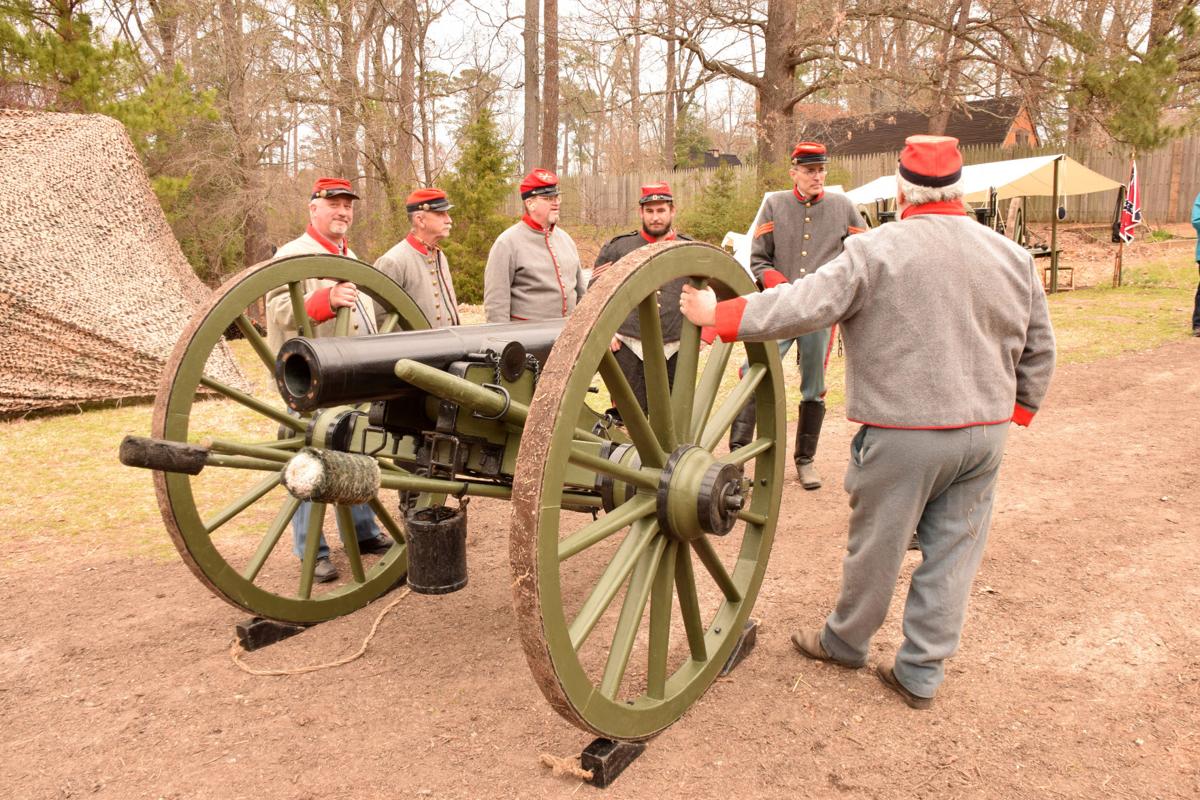 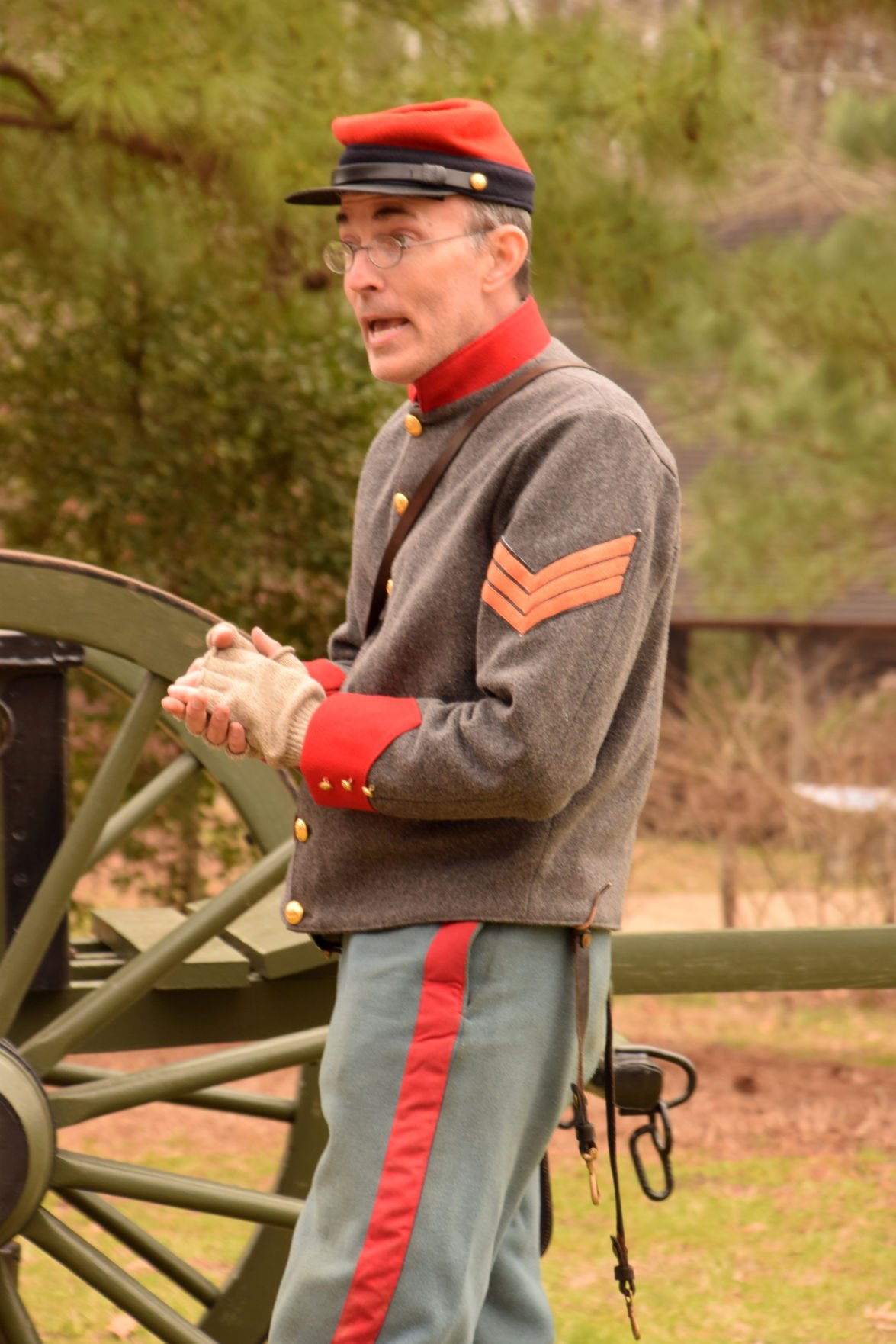 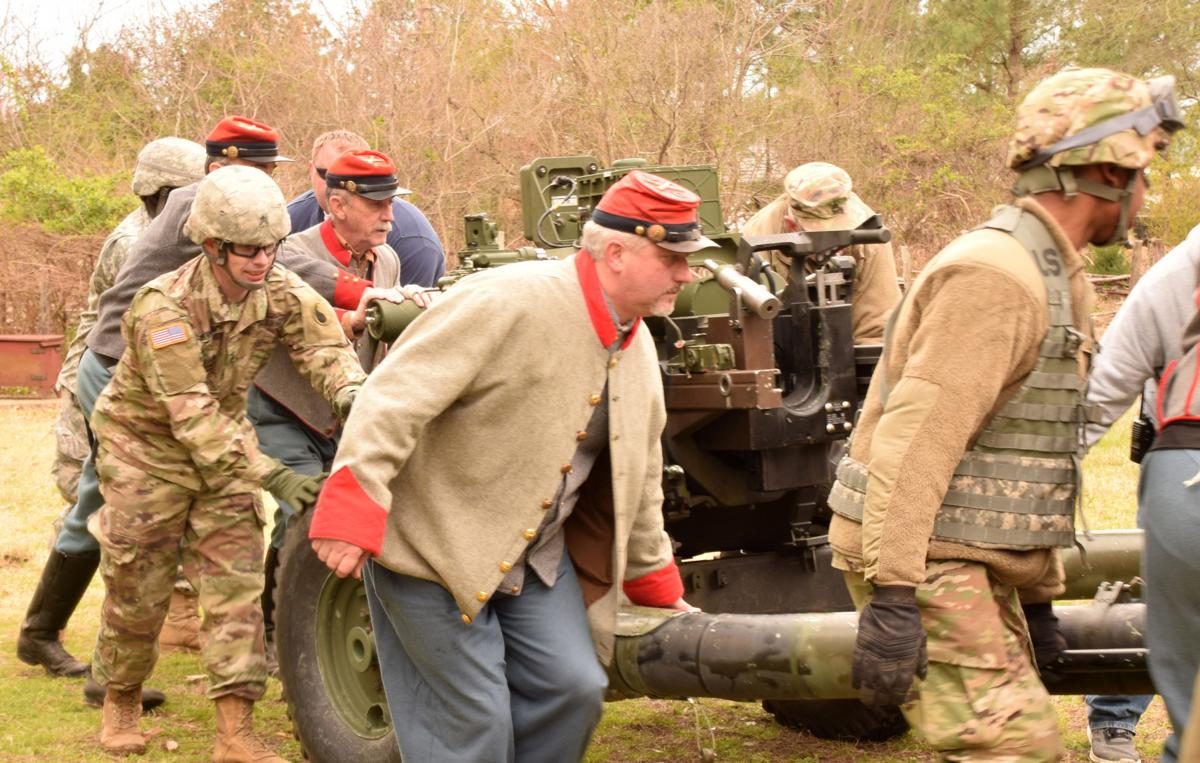 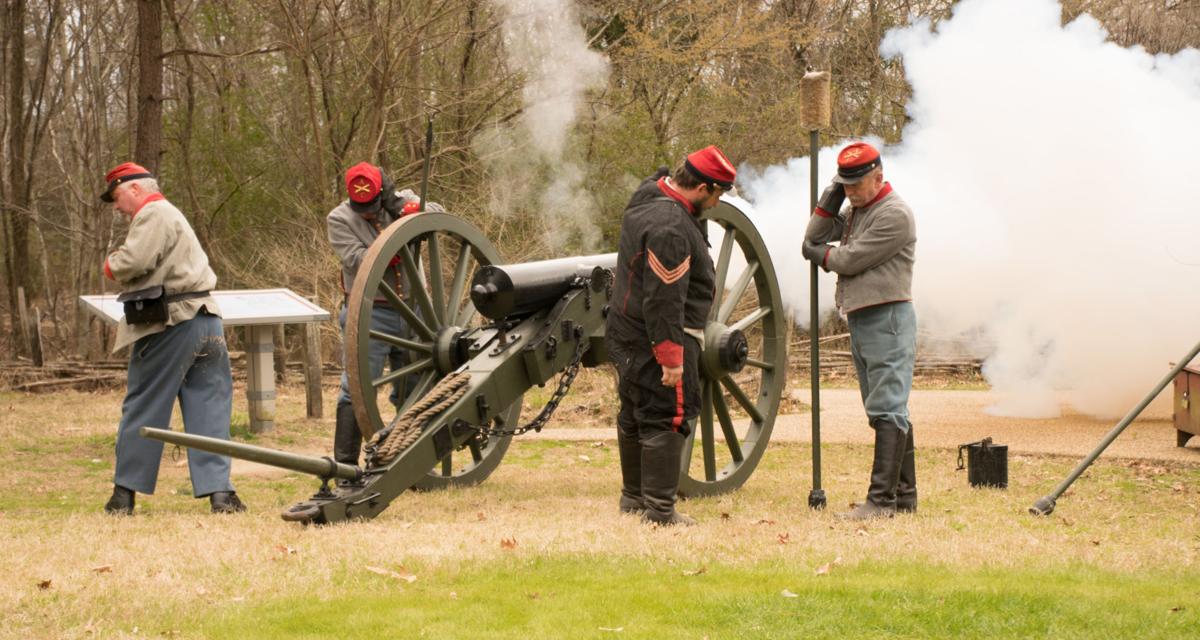 Comparative artillery firing demonstrations have been part of Military Through the Ages at Jamestown Settlement for decades.

After a firing demonstration that featured at least a half-dozen rounds, the Virginia Army National Guard – 111th Field Artillery – secured their 105 mm howitzer and prepared to remove it from the demonstration field.

As the guardsmen raised the trail of the artillery piece, they were joined by members of the Norfolk Light Artillery Blues, a Confederate artillery re-enactment unit. Together the Civil War unit and the National Guard artillerists rolled the modern howitzer from the demonstration field across a paved path to the VANG camp.

The 111th Field Artillery of the Virginia National Guard traces its heritage back to the Norfolk Light Artillery Blues which was formed in 1829 as a state militia unit and a prestigious social club.

After assisting their modern counterparts, the Norfolk Light Artillery Blues rolled their replica of a U.S. Model 1841 12-pound field howitzer onto the demonstration field.

“The Blues saw extensive service throughout the Civil War. In the early days of all things - as a coastal artillery unit based at Sewell’s Point in Norfolk – where the U.S. Navy currently berths its aircraft carriers,” said Sgt. Chris Hoggard who commands the demonstration team.

The unit’s “claim to fame” at Sewell’s Point was a three-hour engagement with the USS Monitor in May of 1862.  Two days later – with the fall of Norfolk – they were reassigned to field artillery work.  They saw their first major engagement in a land battle at Fredericksburg. From that time on, they were with the Army of Northern Virginia until the end of the war.

The Light Artillery Blues were with the Army of Northern Virginia for every single major battle – including Gettysburg.

“Today, we’re going to be demonstrating how to fire an 1841 12-pound field howitzer,” said Hoggard. “The Blues had two of these in their six-gun battery which would be commonly known as a section.”

Hoggard barks out a command. “Load shell 1,000 yards.” The gun crew responds. He explains that the gun fires an explosive shell, a hollow cannon ball that was full of gunpowder.

“When the shell exploded over the enemy, the shell fragments – in theory – would kill or maim the target we were aiming at,” he said.

The second type of shell fired by the field howitzer – noted Hoggard - was spherical case. Case shot was also contained within an explosive shell. Balls were packed inside to increase the damage when the shell exploded.

“A third type of charge was cannister.  it was basically a coffee can filled with nothing but balls,” said Hoggard. “It would – basically – turn this into a massive shotgun.”

“This cannon has an effective range of one mile. Although it sounds like that’s long range, it was actually considered short-range,” said Hoggard. “Even though this was a short-range weapon, it had an advantage that the Napoleons and ordinance rifle didn’t have,”

The 12-pound field howitzer was designed to drop shells in from higher trajectories.  It was a blend of weapons.

“It was a combination of those long-range flat trajectory field pieces on the one hand, and on the other hand, the very short-range, very high trajectory mortars,” he explained. “It was designed to hit enemy units that might be behind obstacles – like the wall of a fixed fortification.”