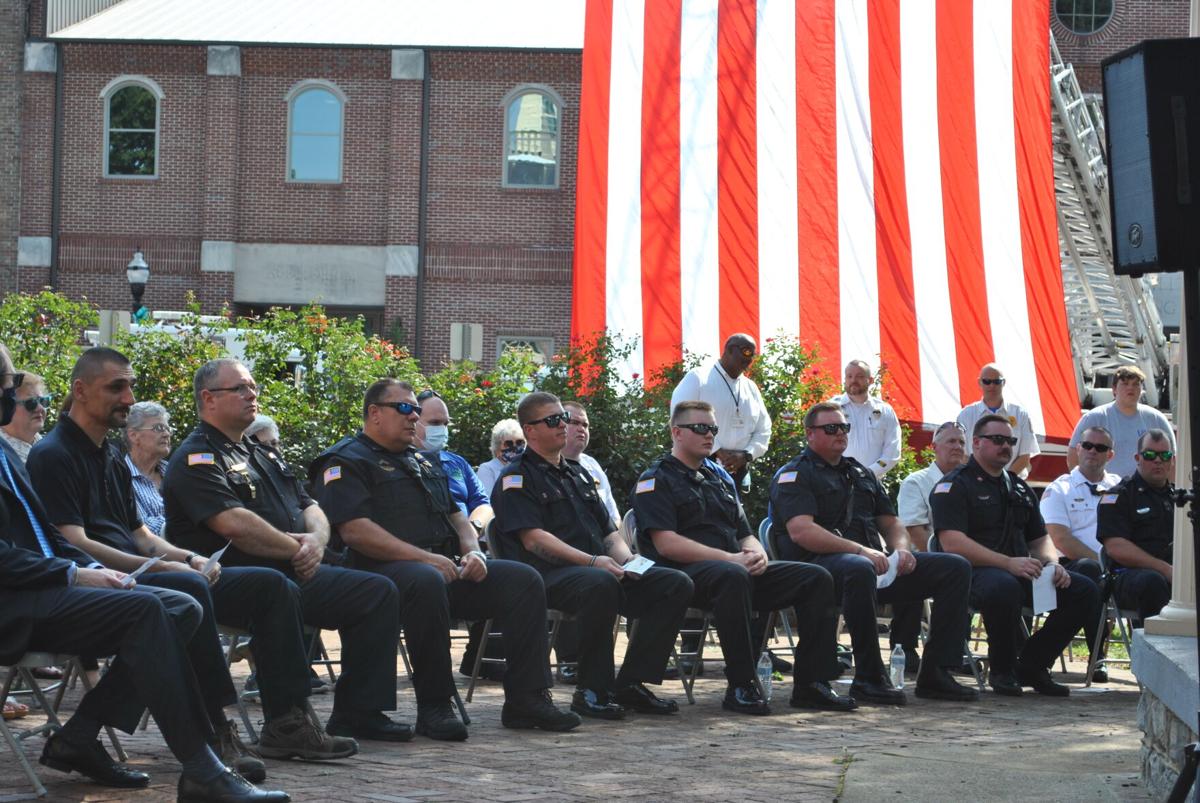 Fayetteville first responders look on in the shadow of the American flag as speeches are given in remembrance of the lives lost and heroism displayed on September 11, 2001. 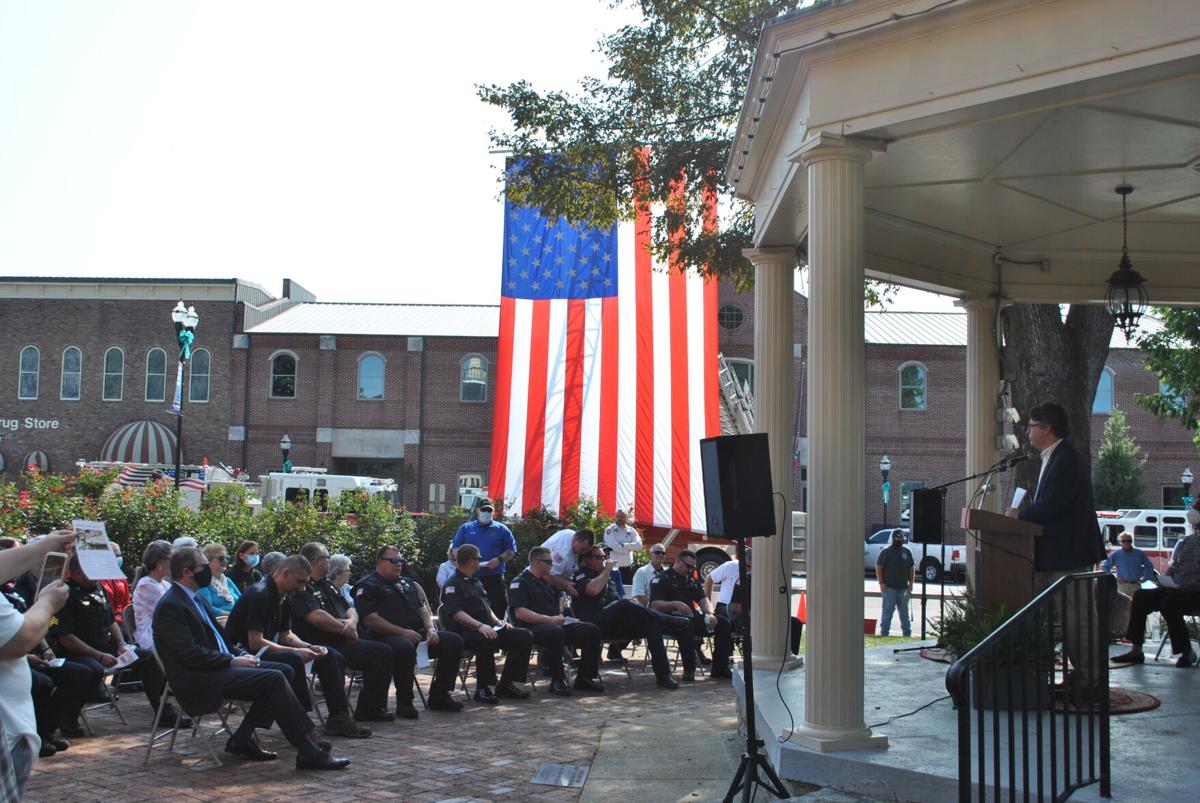 Fayetteville first responders look on in the shadow of the American flag as speeches are given in remembrance of the lives lost and heroism displayed on September 11, 2001.

On the morning of September 11, 2020, citizens from Fayetteville and Lincoln County at large gathered to remember the tragedy and heroism that came with the attack on the World Trade Center 19 years ago.

Citizens gathered at the bandstand outside of the Lincoln County Courthouse, congregating under the shadow of an enormous American flag that whose colors shaded the courthouse lawn. Many prominent figures in Fayetteville, Lincoln County were present and would go on to speak on the significance of the date and the unifying power of those among the citizens of the United States who may be regarded as heroes for both their efforts in September of 2001 and the tremendous price many have had to pay.

In service of the event were the Fayetteville High School Band, who bolstered the power of the gathering by performing the Star Spangled Banner while the crowd looked on the flag after which the piece is named.

Carrying out the ceremonial components of the event were the youth of the local Scout Color Guard, who took it upon themselves to place the American and Tennessee flags upon the bandstand prior to the series of speeches delivered to the attendees. The Scouts carried out their responsibility with formality and stoicism.

Biden: Trump should step down over his Covid-19 response

City Mayor Michael Whisenant was the first to speak, commenting on the lives lost on 9/11 and the heroism of the men and women who put their lives on the line for others on that day, saying, “They went in, some knowing what the dangers were, some not realizing that the towers would fall, but they went in because that’s what they were trained [to do], and they didn’t hesitate to do it – to make the ultimate sacrifice for our country.” Mayor Whisenant then asked those listening to be mindful of such events, highlighting for those youth in attendance, “What comes out of situations like this is the resolve of the United States of America. It’s who we are and every life matters.”

Mayor Whisenant then gave the podium to Steve Cross, who was met with applause. Cross began by acknowledging the first responders present, saying “It makes my heart swell to see you all.” Currently serving with MTAS, Cross noted that he’s spent plenty of time in Fayetteville in the last few years, and, as a result, has developed both a personal and a professional relationship with the men and women looking on in uniform.

Cross began to talk about the emotional weight of the gathering, saying, “This ceremony has such meaning. I don’t normally get nervous, but when I’m trying to talk about 9/11 and the people whom it impacted, it really makes me nervous and I try to do a good job for them.” Cross went on, “When we talk about first responders, a lot of words come out – patriotism, heroism – so I actually went and looked in the dictionary, and patriotism is defined as ‘love or devotion to one’s country.’ I would offer that patriotism could be community patriotism. It could be love or devotion to one’s community.” On this note Cross spoke of the strong community devotion that he has witnessed in Fayetteville, defining the love and commitment he has seen here to be a form of patriotism. Cross went on, “Hero – another word that gets used quite often – I looked it up, and it’s defined as ‘a person who is admired for great or brave acts.’ Those firefighters and those police officers who were killed that day absolutely are heroes.” Cross added to this, however, that it was not their death that made them heroes; rather, it was their consistent, daily choice to put on a uniform and serve others.

Cross then added that the heroism of those present for 9/11 and serving in their communities today is not limited to those individuals in uniform, but rather applies to any and all citizens who took it upon themselves to help others on that day and in the present. “There are heroes among us today,” Cross would go on to say.

Following Steve Cross’s speech, Vice Mayor Dorothy Small took the podium to sing “God Bless America,” concluding the event with a moment of reflection as the massive three-colored banner waved above the town.