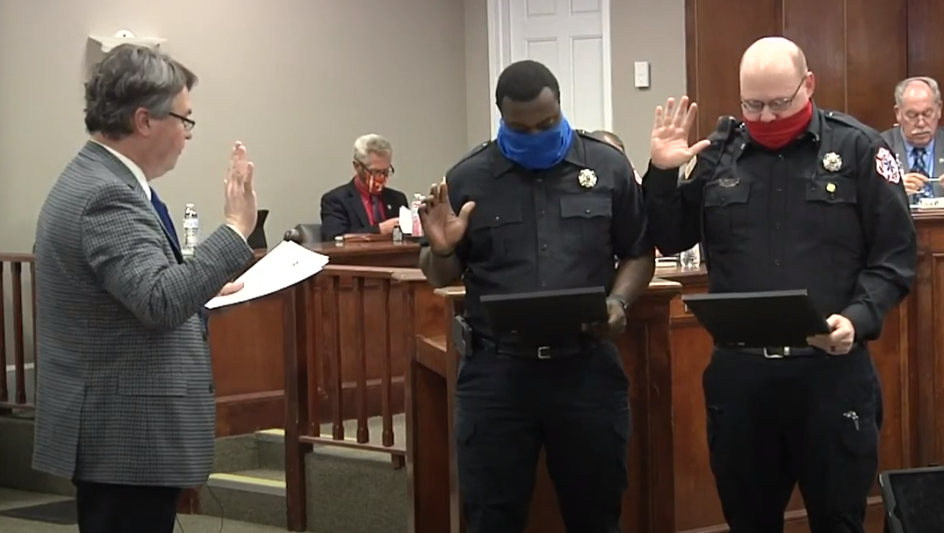 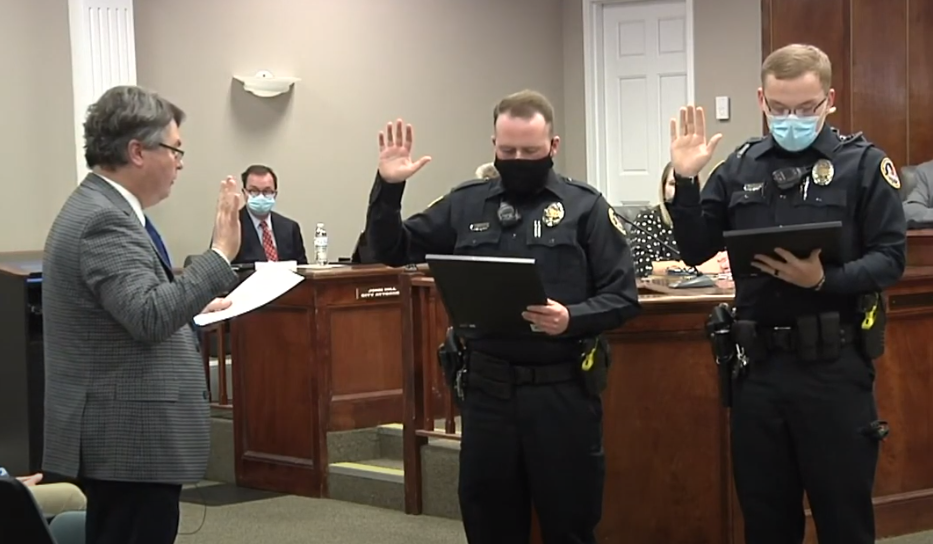 The swearing in of two new police officers and two new firemen, updates on the city’s various standing committees, and new business items were on last week’s Fayetteville of Mayor and Aldermen agenda.

The meeting began with the formal swearing in of new police officers Dalton Henderson and Jason LaFevers and new firemen Gerald March and Daniel Spray. The four were applauded when they were administered their oath.

New business included the construction of a fire hydrant on Molino Road, additions to the personnel policy language and the approval of three permits for upcoming 2021 events that include the Slawburger 5K, the Firecracker Chase 5K and Life Chain.

Since the placement of the fire hydrant is mandated by law, the board passed the resolution for its construction, capping the funding for the project at $9,000.

The board also approved additional language to the city’s personnel policy and on its website that would favor inclusion and diversity.

City Finance Director Stacy Rozell then presented the finance report, reminding residents that property taxes are due February 28. After that date, penalties will be incurred.

A report from Parks and Recreation was given, followed by a report from City Administrator Scott Collins, who stated that sign-ups for youth baseball, softball, and soccer will continue through February 27 at the Recreation Center. Registration fee is $45. He also said that the Parks and Recreation Department is now closed on Sundays; however, those who wish to have celebratory gatherings in the facilities on a Sunday are asked to call two weeks in advance so accommodations can be made.

The primary update from Public Works was a follow-up on the approval of the Knuckle Boom truck purchase that was approved by the full board last month. The truck had been ordered and is expected to arrive in March.

The City Administrator reported that during Gov. Bill Lee’s February 9 State of the State address, Lee proposed offering $200 million to municipalities across the state for infrastructure improvements. If the state budget is approved, Fayetteville would receive $184,200.

Collins also noted that an application for a city building inspector has been accepted, and, if that individual passes pre-employment screenings, he/she will begin work on February 26. This position has been vacant since last August, during which time Public Works Director Eddie Plunkett has been interim inspector.

The board was then asked if they should accept the planning and codes committee to not annex Liberty Road. Accepting their recommendation, the board voted no on the measure.

The Payment in Lieu of Taxes (PILOT) agreement for C&S Plastics was then addressed. The agreement that would require approval from both the County and the City was quickly passed. The County will take action on this matter during its February County Commission meeting.