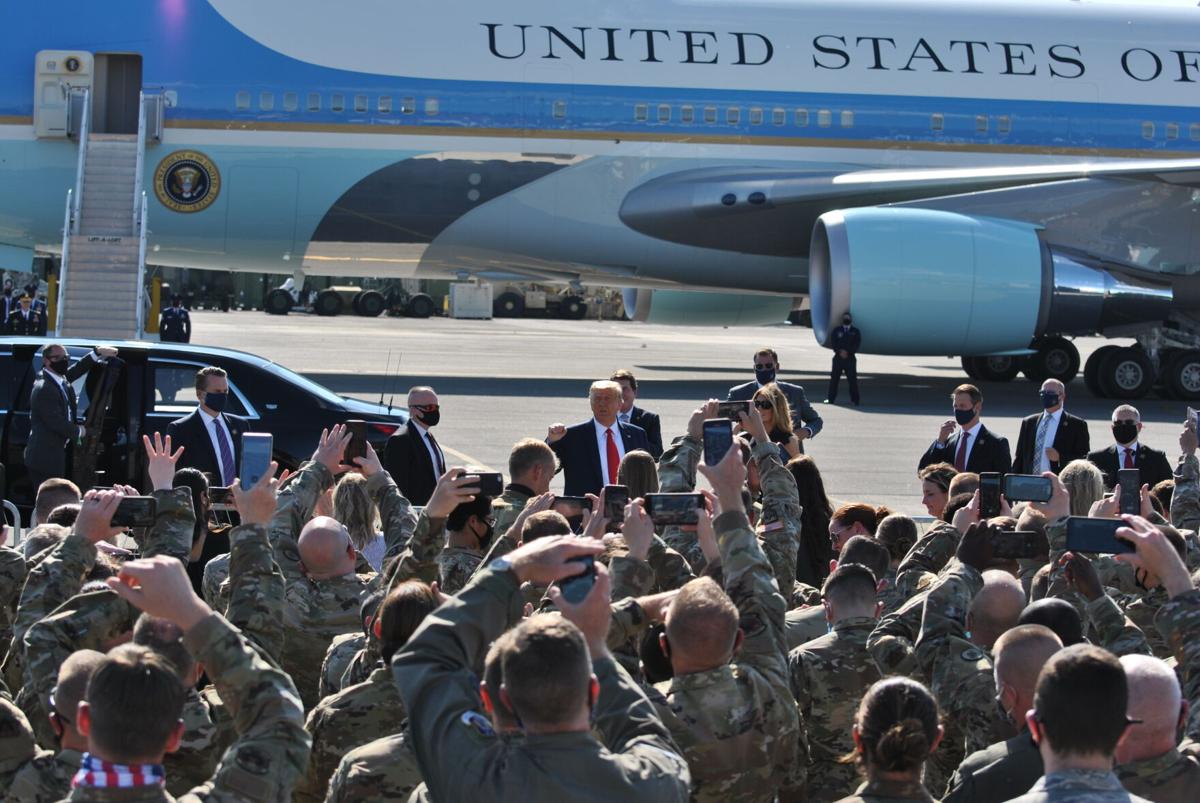 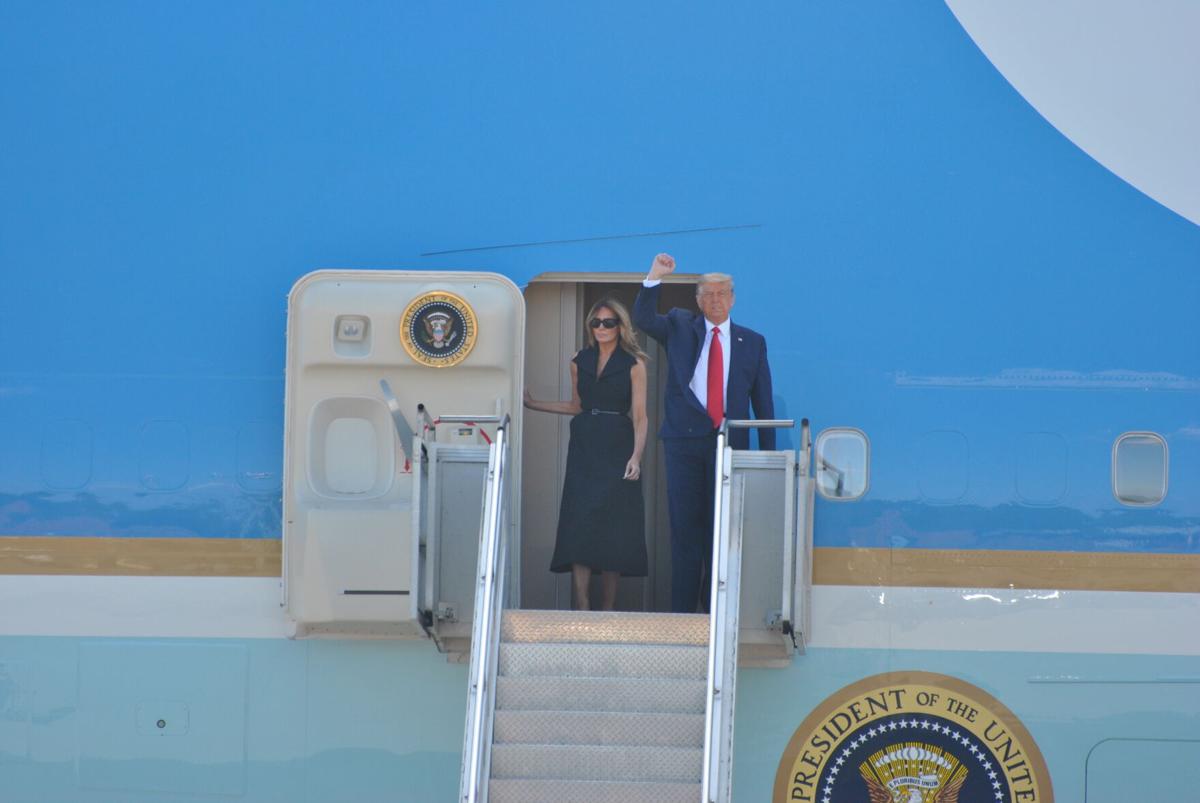 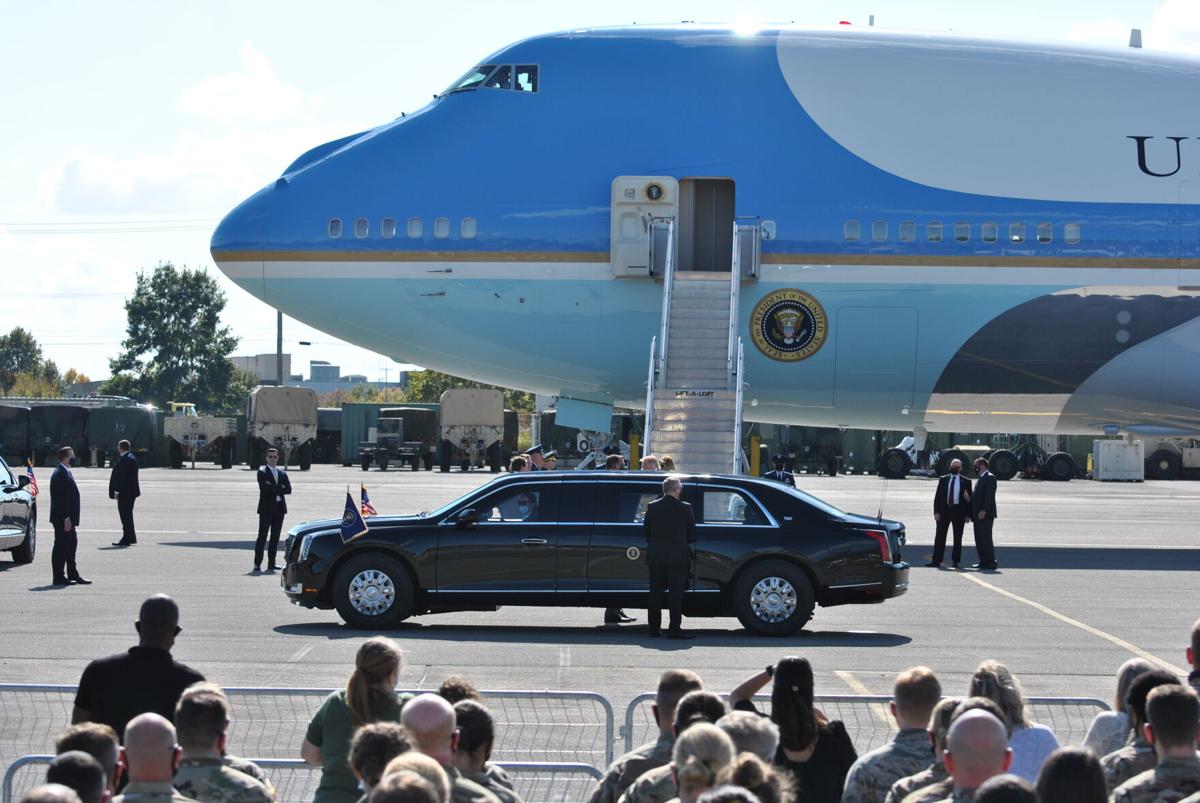 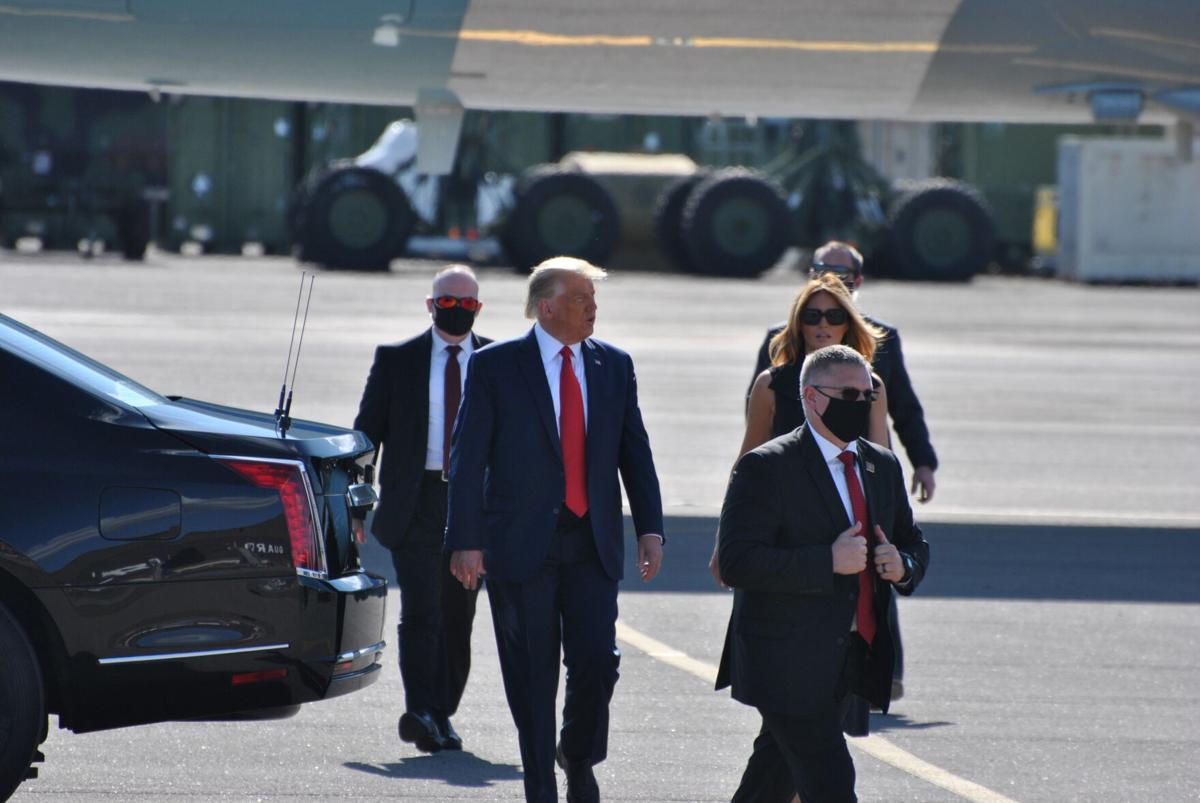 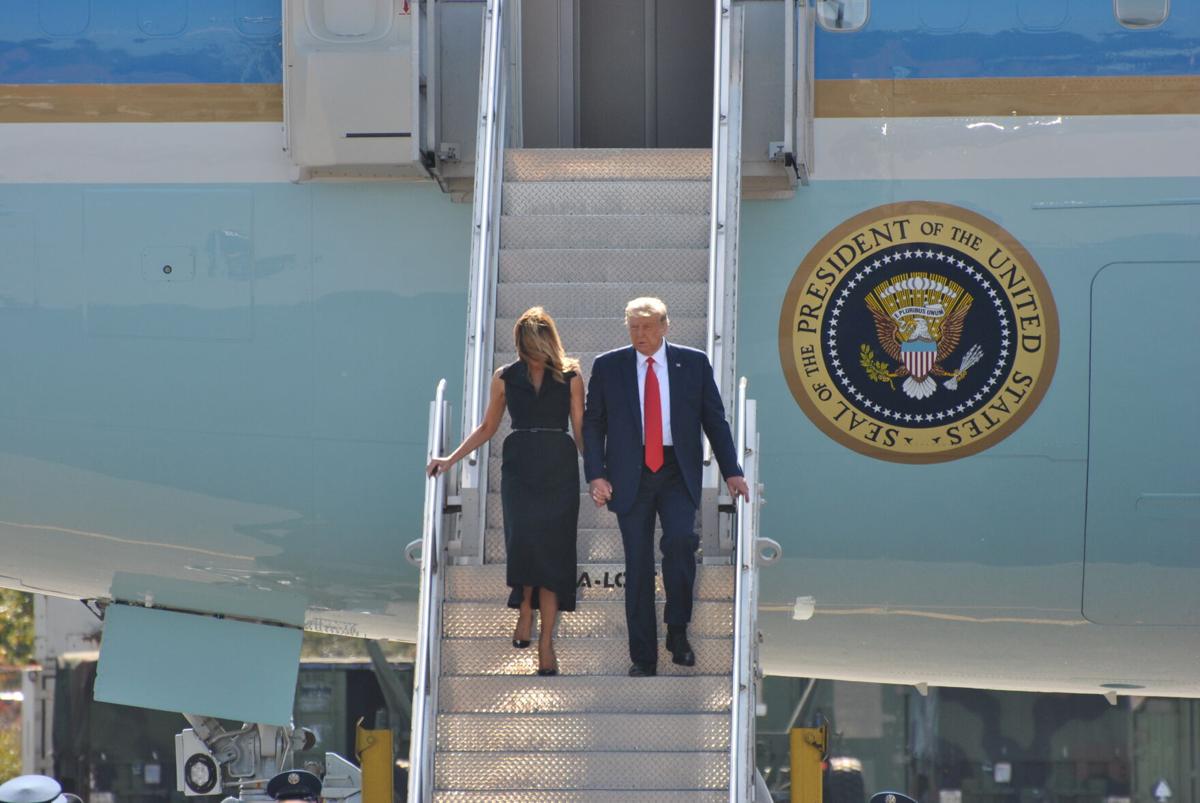 The photograph is likely one you feel you’ve seen before. It’s not far off from the many others that have flashed beside talking heads and been plastered above articles such as this one for the past four years. The photograph on this page is not a stock image, however. It was taken by Elk Valley Times staff on Thursday, October 22, several hours prior to the final presidential debate. While the debate itself remains publicly available and the photos taken by our staff are not remarkably different from those of other news outlets, what follows is a rare look at the process that surrounds those commonplace pictures of presidents disembarking from their singular aircraft – an account of the procedure and vagaries whose pictures seldom make it to print.

For a journalist, the drive to the location where Air Force One is to land is one of vacillating anxiety. You’ve been given a precise window of time during which you will be permitted entry, an equally precise window during which you will be screened by the Secret Service, and an exact, down-to-the-minute time at which the President’s plane will be “wheels down.” On one hand, this is terrifying – unusually light traffic and you’re arriving at a heavily fortified gate when you’re not allowed to be there; one fender-bender on the highway and you achieve the same result. On the other hand, however, this exactitude is comforting – if there were ever a schedule that would be followed to the letter, it would be that of the Secret Service, and that reliability eliminates the usually probable affair of having to wander around asking questions about where to go and when things are happening.

For those of us who made it there within the prescribed window of time, we were met with a row of soldiers whose affect was kind but whose demeanor was appropriately quite cold and conducive to efficiency. Our ID’s were checked against a list of names on a clip board, and we were instructed to exit our vehicles and open them up for search. During the search, we were led to a mobile room, a dark little office space with wheels and a trailer hitch, in which we were to sit or stand for the duration of the examination. Perhaps it goes without saying that this sort of isolation on a military base induces a good deal of over-thinking. One begins to ask themselves if there might be a pocket knife left in the console and what the repercussions of such a nebulous object might even be, all the while knowing that you don’t even own a pocket knife.

But, within minutes, a serviceman swung open the door to the little room and told us that we were clear to move on.

After several minutes of waiting in our vehicles for the arrival-window to end, we were led in a caravan through a winding series of barricades to a parking lot. As journalists exited their cars, the mood of the event became a bit more frantic. Throughout the lot, reporters, videographers, and other envoys of media could be seen scrambling to collect and, in some cases, assemble their equipment. This journalist almost felt out of place armed with just a camera and a phone, but I suspected that a cumbersome tri-pod and fifty pounds of video equipment probably wasn’t going to be very pleasant to haul out to a screaming-hot tarmac, and I forgave myself for being lightly-equipped.

It was at this point that the Secret Service made their first appearance, and the balance of authority appeared to shift. Everyone present – including the servicemen who had been directing us – was subjected to a search of our person that is best described as a much more efficient version of a TSA screening.

Once being screened and approved to move on, we were gathered in a room that resembled a small college classroom with theater seating. Some journalists were still manically attempting to assemble their equipment, but most of us simply awaited further instructions and enjoyed the air-conditioning. After a few minutes, White House press credentials were issued to all of us, and we were sent out into the sun.

Already gathered in the airfield were a group of soldiers as well as a handful of civilians. They were surrounded by layers of metal gate, several feet ahead of which were the mobile staircases upon which Air Force One’s occupants would disembark. The field was a several hundred feet of blacktop and quiet, despite the many people running about in preparation for what was about to happen.

We were led out to a press-riser – a long wooden-planked truck-bed that offered us perhaps five feet of elevation – that overlooked the gathering and would allow us to squarely face the port-side of the plane.

Incoming GOP congresswomen: Women are taking their seat at the table

Ossoff: Senate will be in 'paralysis' if GOP holds control

From that point it was a matter of waiting. Press from around the country passed speculation to one another about the logistics of the landing, where the President would be going afterward, whether or not he would speak to the crowd, etc. At a certain point the motorcade made its presence known with the rumbling of motorcycles, and police cars and black sedans began to multiply on one side of us after another interval.

Eventually, the specified time arrived, and the entirety of the gathered press began peering around one another, attempting to be among the first to see Air Force One come rolling down the runway. It was only another three minutes or so before we all achieved this privilege at once, snapping off photos of the enormous plane between one another’s heads.

As Air Force One taxied toward us, its great size and distinction became increasingly apparent. It was clean and gleamed in the sun, the seal of its occupant’s office stamped on its side and looming large over the crowd below. There is something almost whale-like in the shape and size of the aircraft, its massive hull and sky-blue finish calling to mind a bellowing leviathan in shallow waters.

Seemingly instantaneously, the layout of the airfield changed. The presidential limousine was suddenly where the staircases had been, and one of those staircases was now adjacent to the hatch. The area quickly became more populated, as members of the secret service and military flooded the field and the motorcade queued up for a quick procession. Snipers could be seen atop the hangar at the end of the field, and the regular output of outgoing planes ceased.

A small staircase unfolded from the back end of the plane, and a large group of professionally-dressed men and women – members of the White House press corps – spilled out onto the tarmac. Equipment and baggage was moved from place to place, eventually finding its way into one of the many black vehicles now lined along the airfield.

The main hatch then opened, the presidential seal clear on its interior, and a seemingly long interval of inactivity followed as we on the press riser trained our cameras on the aperture out of which the President would emerge.

Then, as expected, the President and First Lady appeared at the top of the stairs, giving a wave and proceeding down and the columns of military officers who had gathered to greet them. After a moment of conversation the President proceeded over the crowd gathered within the steel gates and spoke for a moment. What was said was inaudible, and is lost to the roaring of an airplane.

Then, with utmost efficiency and President aboard, the motorcade rolled away, Air Force One remaining on the tarmac.

We were dismissed by the secret service, who stood with open palms to receive our credentials. Exiting turned out to be as simple as walking away. However, many journalists in the crowd could be heard discussing how they intended to repeat this process that very night.