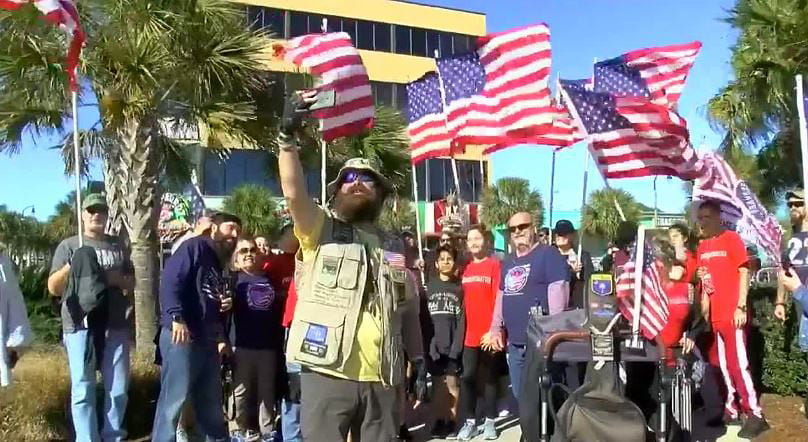 Retired Staff Sgt. Van Booth takes a selfie at the end of his coast to coast walk Tuesday in Myrtle Beach, S.C. His journey, dedicated to increasing awareness for veterans suicide and post-traumatic stress disorder, got its start 10 months ago in San Juan Capistrano, Calif., and covered 3,135 miles. 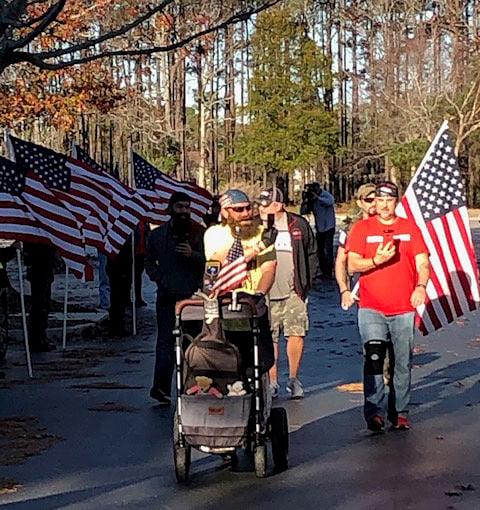 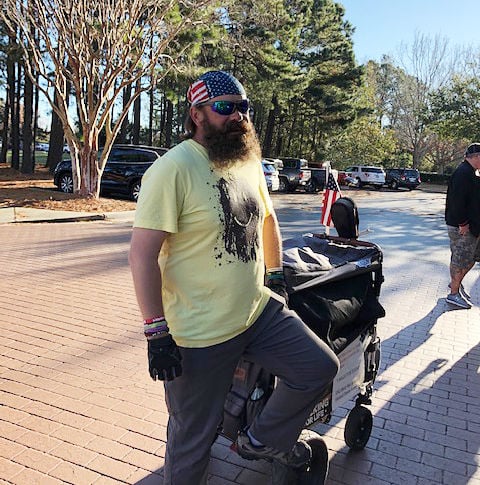 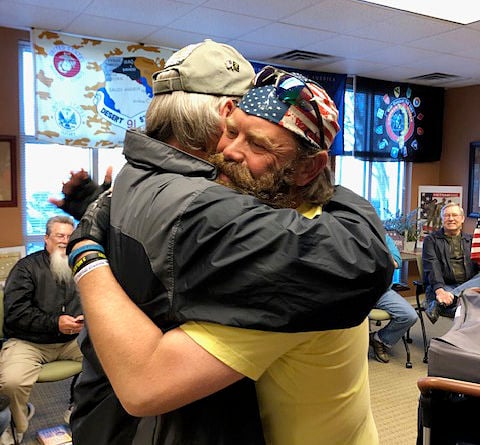 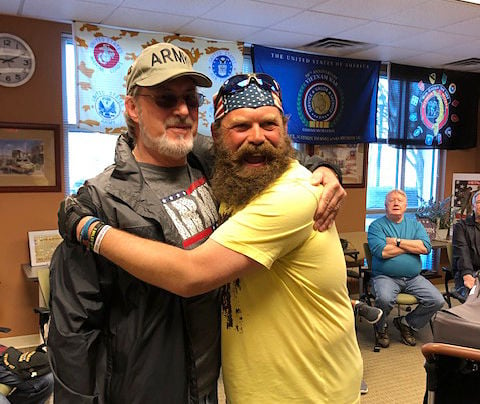 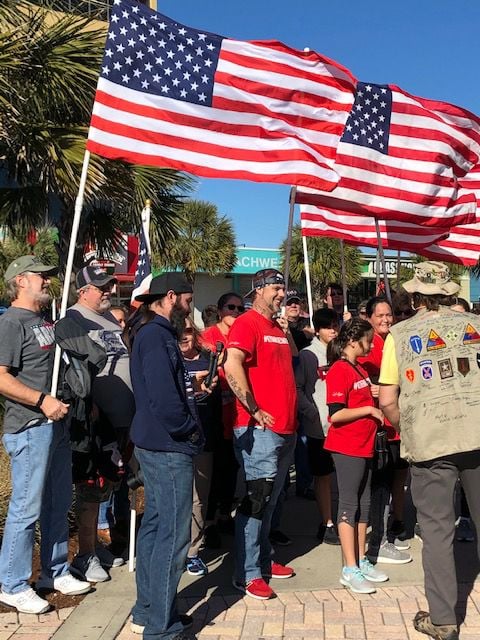 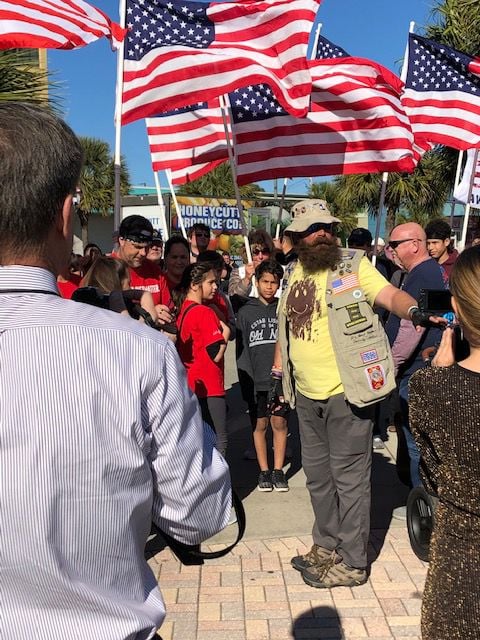 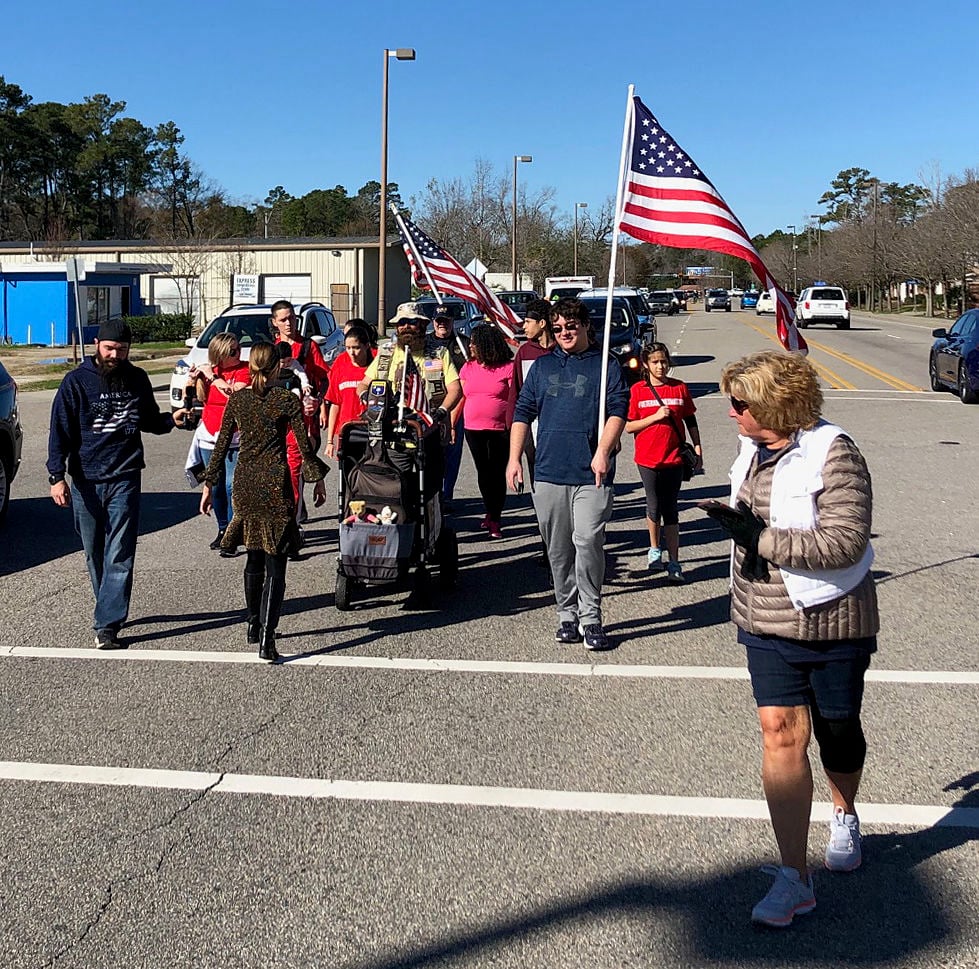 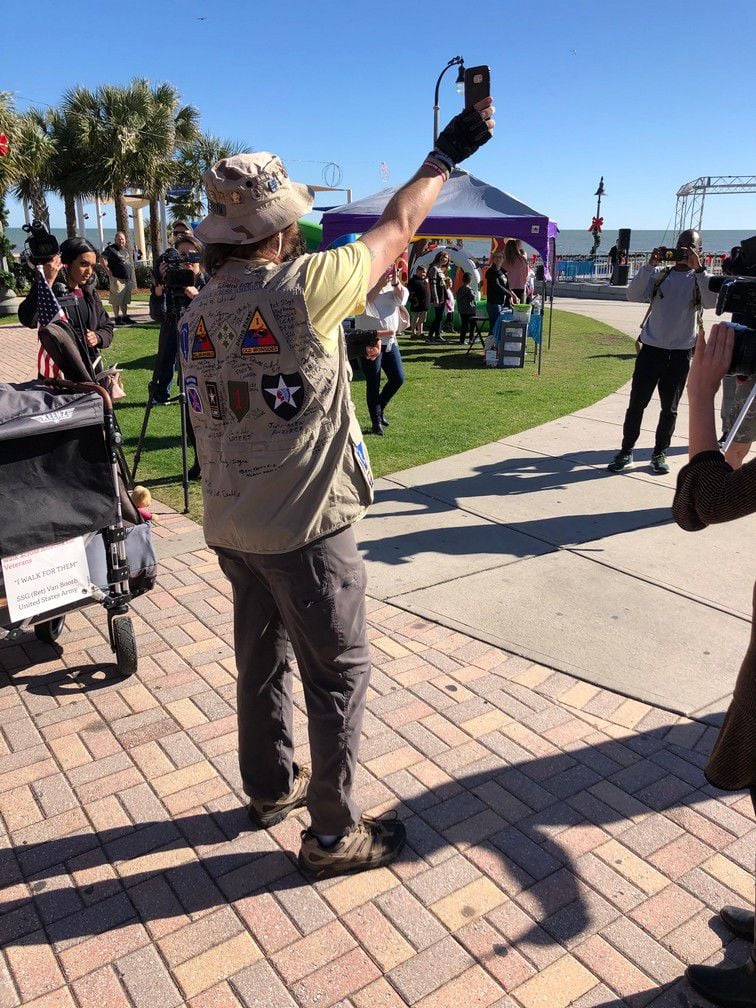 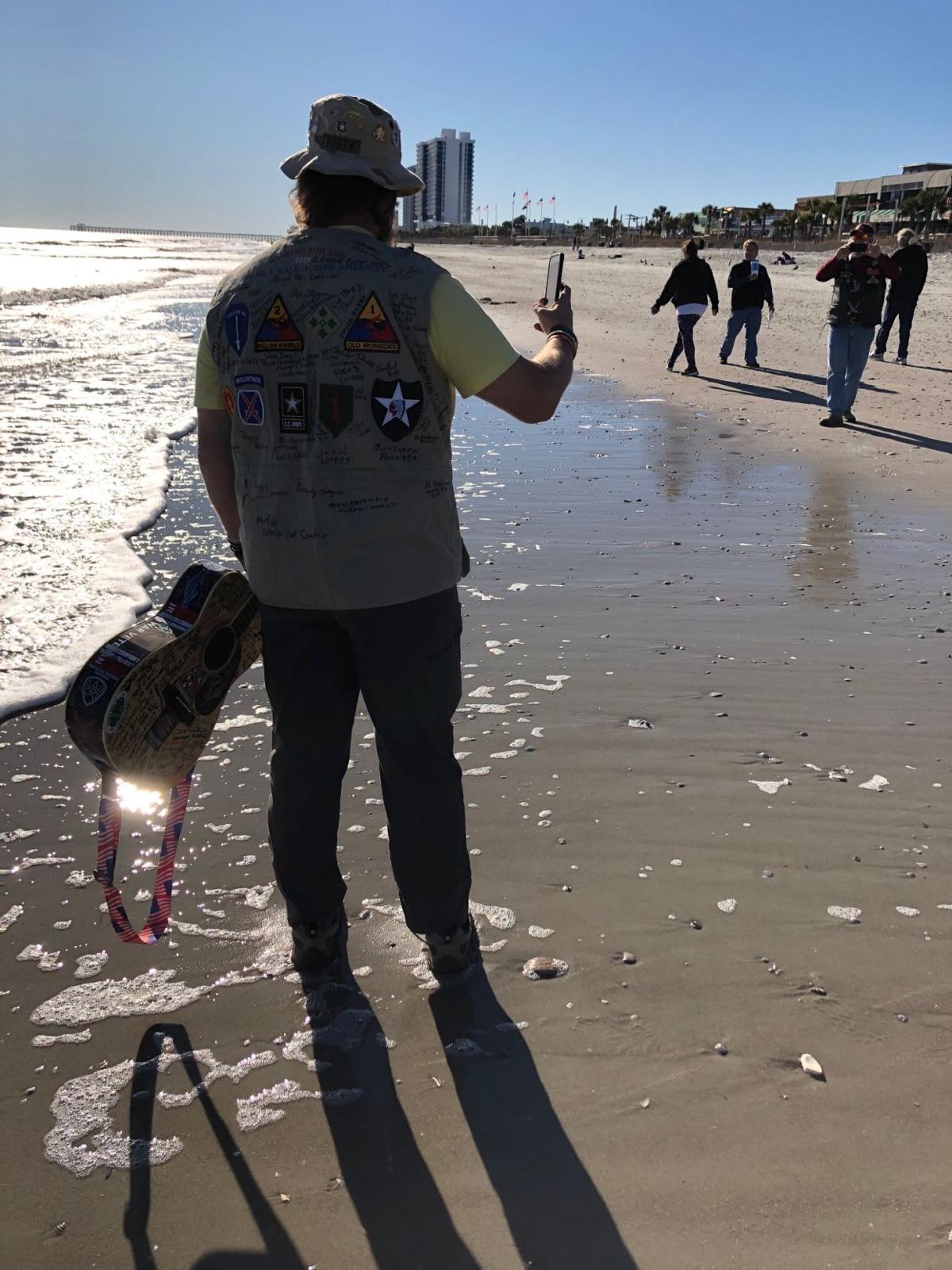 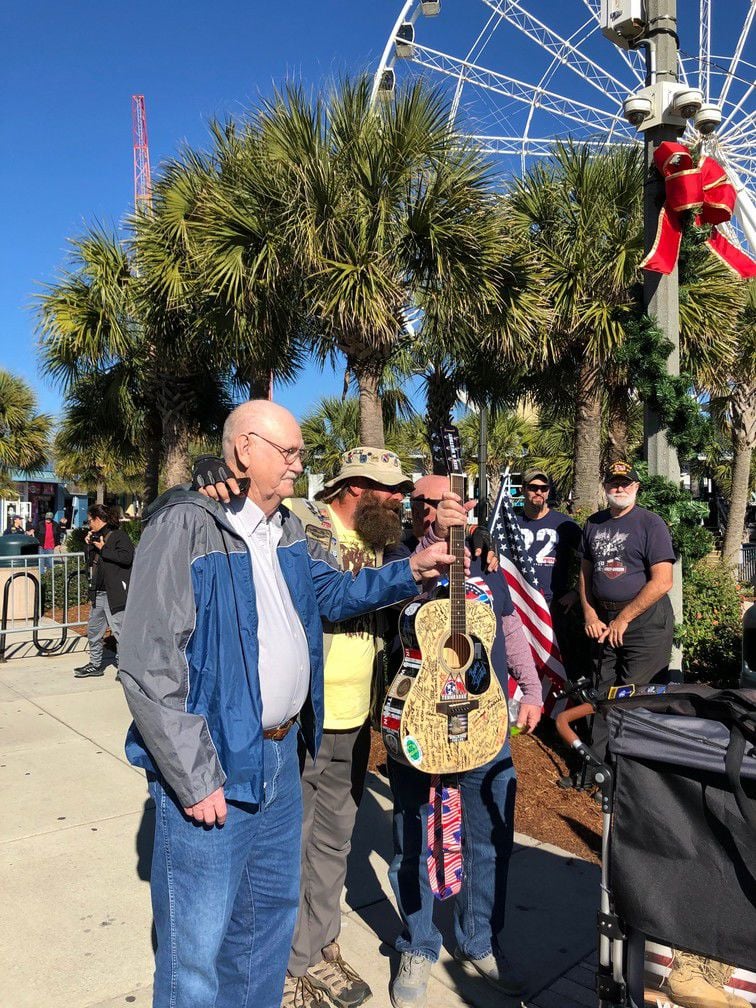 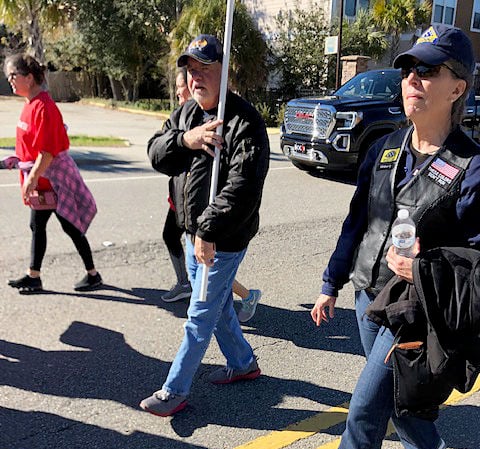 Retired Staff Sgt. Van Booth takes a selfie at the end of his coast to coast walk Tuesday in Myrtle Beach, S.C. His journey, dedicated to increasing awareness for veterans suicide and post-traumatic stress disorder, got its start 10 months ago in San Juan Capistrano, Calif., and covered 3,135 miles.

Ten months after beginning his ‘Walk for Life’ on the Pacific coast in San Juan Capistrano, Calif., Fayetteville’s Staff Sgt. Van Booth (retired) completed his journey across America on the coast of the Atlantic Ocean in Myrtle Beach, S.C., New Year’s Eve.

“Ocean in view – oh, the joy,” he said, as he neared the end of his 3,135-mile trek Tuesday, a journey that saw him take 7.1 million steps across deserts, mountain ranges, and the hills and plains of the country. While the vast majority of those steps were taken alone, his final few miles were anything but, as other veterans, friends, television camera crews and journalists, along with a police escort, joined him.

“If I’ve impacted just one life, then I’ve done my job, I’ve done what I set out to do,” he said in a live stream as he took his final steps on day 312 of his walk, going on to describe the day as “truly amazing.” “Thank you for supporting me. There’s been literally thousands of you, and I wouldn’t have been able to be successful without a whole bunch of you and all the support along the way.”

As his walk came to an end, the sixth and final string was added to the guitar he’s carried with him throughout the journey to raise awareness of veterans’ issues, particularly veteran suicide and post-traumatic stress disorder. The guitar, which had begun the journey without any strings, had a single string added after every 500 miles to symbolize how veterans suffering from the disorder are “broken” but can learn to be whole again. The first string went on at the Utah-Nevada border, the second in Colorado, the third in Kinsley, Kansas, the fourth in Jefferson City, Mo., and the fifth in Tennessee. Along the way, veterans and others signed the guitar, some adding encouraging messages.

The guitar, too, represents two causes for which Booth was also raising awareness – Operation Song and Freedom Sings USA, organizations that pair songwriters with veterans to help them write a song as a form of music therapy. Healing for Booth began after his retirement following a 20-year Army career when he learned about Operation Song in Nashville. He had lost 15 friends in the Middle East, including his best friend, Channing Bo Hicks.

Before he began his walk, he delivered his song, “My Brother Bo”, to Hicks’ family in Greer, S.C. He made it back to Hicks’ grave on the final leg of the walk. Hicks was killed in action in Afghanistan in 2012.

Al Jarvis, one of the first to embrace Booth at the end of his journey, said Booth was one of the original members of Freedom Sings, adding that the walk along is symbolic of Booth’s own struggle with PTSD – “It’s a symbol of healing for him,” Jarvis told a Myrtle Beach newspaper. “This walk has been extremely therapeutic for him.

“I have an understanding of what it’s like to go through that, you know, and a lot of people don’t,” Booth had said in the interview with Jarvis. “We have 22 veterans a day taking their lives to suicide, veteran suicide, so it’s something I’m pretty passionate about, trying to get veterans to seek help, but not only that, but try to find something they used to enjoy, and go after that.

“A lot of veterans, they just want to be listened to, you know, so a lot of times, all you’ve got to do is just listen. You don’t have to say anything, just listen to them. You know, be empathetic.”

Booth said he saw so many things as he crossed the country. He took about 8,000 photos and videos, and continuing a habit he developed in the Army, he kept a journal of the trip and is thinking of writing a book about his experiences, from chance meetings with other cross-country travelers to his encounters with wildlife.

On his Facebook page, “Walking for Life”, thousands have posted words of encouragement and pride as the veteran posted updates throughout his journey, as well as links to countless newspaper, television and radio stories that have chronicled the trek. Congratulations, too, abounded as he completed his mission last week.

“I’m so proud of Van and honored to have been there for the final mile,” wrote Fayetteville’s Rick Head, who traveled to South Carolina to join his friend on the final miles of his journey, in a post New Year’s Day. “[He’s] a great American hero!”

To soon be nominated for the honor of being named a Tennessee Squire, Booth was invited to return to Myrtle Beach in May to lead the Veterans’ Parade on Memorial Day.

After a few days in South Carolina celebrating the New Year, Booth was headed home to Fayetteville. He had incorporated Lincoln County into his walk just two months ago as he headed south to Huntsville, Ala., and then turned toward Chattanooga before heading to Myrtle Beach.

“It’s been an incredible journey,” he had told The Times then. “We’re not as divided a country as you would think ... I’ve just met so many different types of folks, way more good than bad, all from different believes and walks of life ... It’s really been an adventure.”