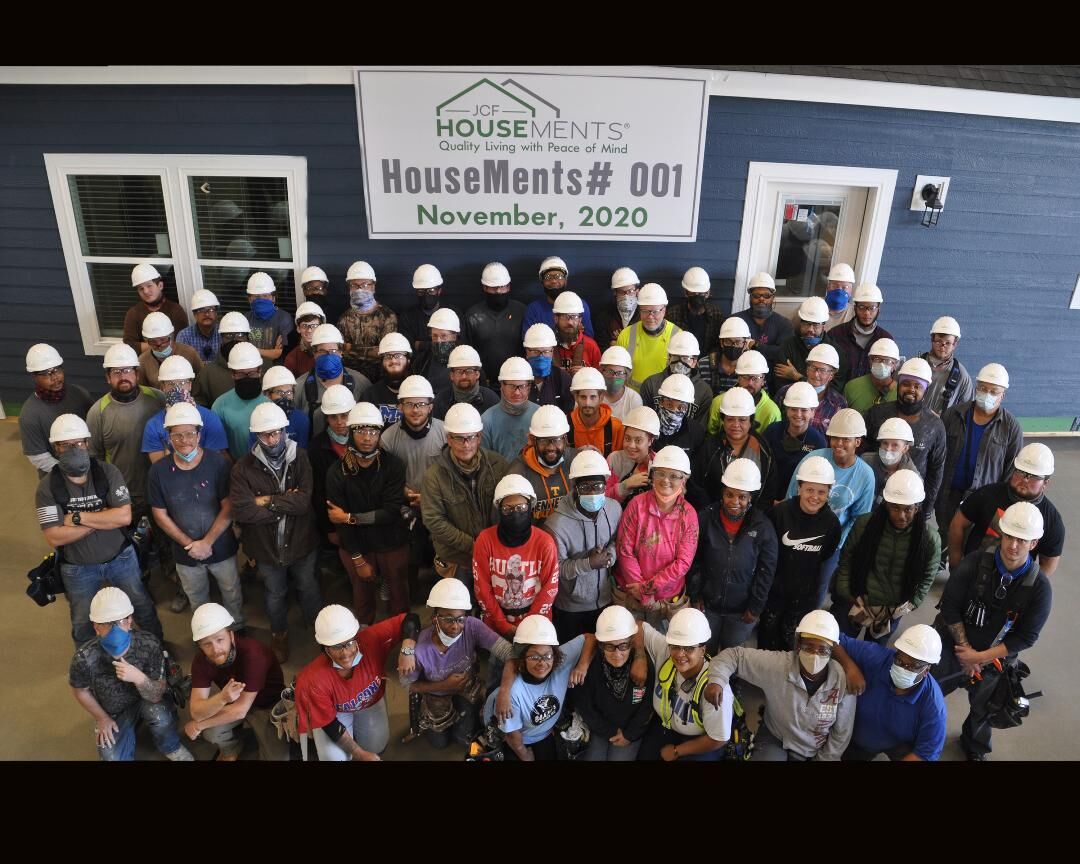 JCF Housements is celebrating its one-year employee anniversary and holding a job fair this week. 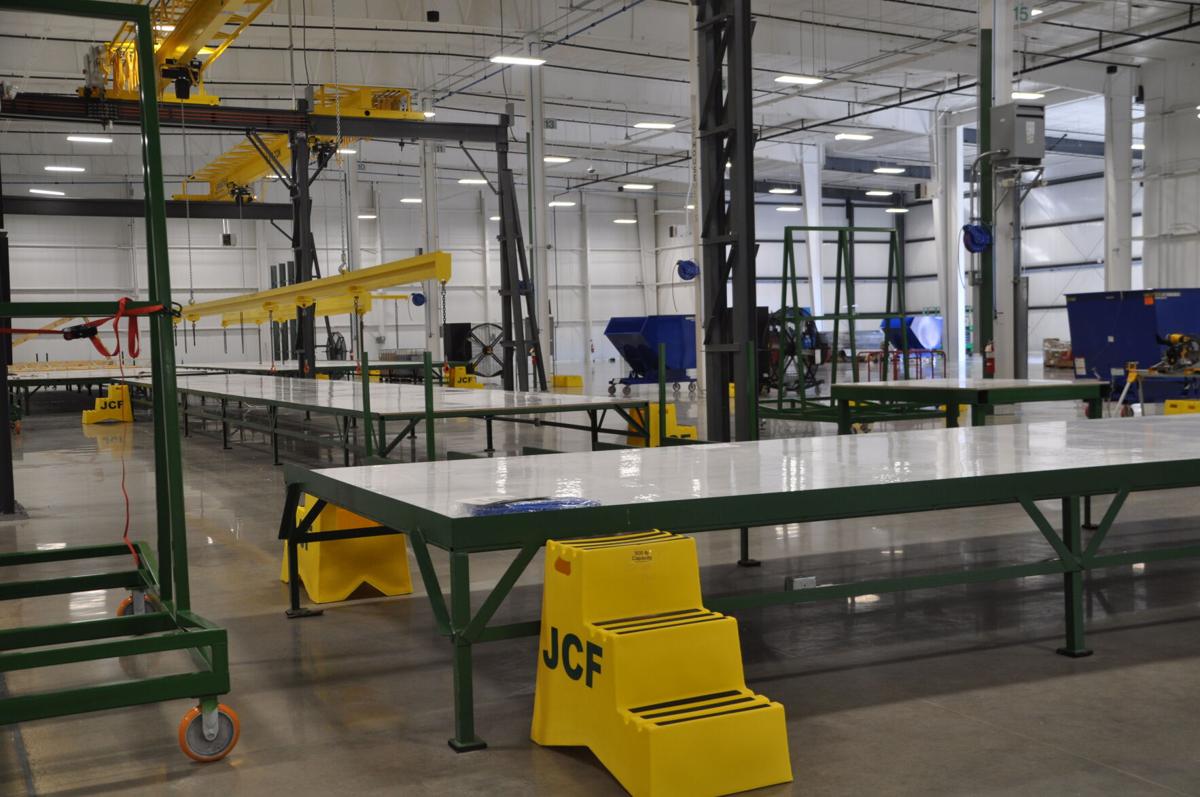 JCF Housements, a Fayetteville industry, specializes in designing and building modular homes at its manufacturing facility on East Park Drive.

JCF Housements is celebrating its one-year employee anniversary and holding a job fair this week.

JCF Housements, a Fayetteville industry, specializes in designing and building modular homes at its manufacturing facility on East Park Drive.

JCF Housements, a Fayetteville manufacturer, is celebrating its one-year employee anniversary and holding a job fair this week as the company continues to grow in Lincoln County.

Chief Operations Officer DeWayne Blackwell said JCF Housements arrived at their current location, East Park Drive in Fayetteville, in April 2020. The 84,000-square-foot facility was basically empty, according to Blackwell, who said the company worked for six to eight months retrofitting the building, adding the crane system and moving in equipment.

In August 2020, the company held a job fair and hired 92 people. Those 92 workers were put to work, with about 80% being trained from scratch, Blackwell said.

“Our retention from those that were hired is probably 60 or 70%,” he said. “They are still here today.”

Blackwell said it was a “good feeling” to get local, core people involved in our growing company.

Today, 90 to 95% of JCF Housements' workforce is from Lincoln County, according to Human Resources Director Robert Kinchen.

Blackwell said JCF Housements' business model is “gated residential communities.” The company currently has active build sites where they install the units and set up communities.

“There is one site in Huntsville (Alabama),” Blackwell said. “We have 200 units on the ground there, and we have another 144 units to put on the ground before the end of the year.”

There is another site in Lebanon, Tennessee.

“We are pushing dirt on it now and should have foundations on the ground by the end of the year,” Blackwell said.

JCF Housements also has two properties in Panama City, Florida, and another two pieces of property in South Carolina.

“We are growing communities,” Blackwell said. “The rental business continues to grow.”

He said the company's footprint is to give rental residents a better living environment. All of the JCF units are ground level, with private driveways, mailboxes, a patio and about a quarter-acre of land.

“We take care of the trash and lawn maintenance,” he said. “Basically, you show up and live.”

The units are also considered “high-end living” with social distancing and pet-friendly amenities.

“The reason it's called 'Housements' is because it's a house with the amenities of an apartment,” Blackwell said, adding the sites include things like a clubhouse, swimming pool  as well as ability to barbecue on their own private patio.

The homes brought to each site are built in Fayetteville, which is why JCF Housements is looking to increase workforce and production.

‘The Great’: Gillian Anderson Arrives in a First Look at Season 2 (PHOTOS)

‘Only Murders in the Building’: What Did You Think of the Ending? (POLL)

JCF Housements is holding a job fair from 8 a.m. until 4 p.m. Thursday at Hampton Inn & Suites, 100 Redstone Drive. The company is looking to hire at least 20 new employees and is offering full-time, day-shift positions. Starting pay is $18 to $22 an hour, depending on experience, and available benefits include health, dental, vision and life insurance; paid holidays; and 401K. Construction experience is a plus but not necessary.

Blackwell said the company's goal was to fill between 150 to 200 positions when they started in Fayetteville. However, COVID-19 made it hard on the business, which started operations at the end of 2020. The pandemic, supply costs and issues in the supply chain made it difficult to increase production, according to Blackwell.

“We want to get ahead of the employee curve,” Kinchen said, adding companies across the nation are struggling with retention. “We want to hire enough at the job fair to take care of us for a while.”

JCF Housements is also holding a one-year celebration this week. Wednesday marks the start date for a number of the initial employees hired at JCF.

“We want to recognize and celebrate our employees, for their commitment to JCF” Blackwell said.

As for the future, JCF Housements has one major goal.

Blackwell said the company wants to continue to grow production.

“We need our production to get to at least six floors a day,” he said. “Right now, we are at two floors a day, so that is going to incur hiring more people and continuing to have one of the safest, cleanest places for them to work.”

He added JCF is looking for good carpenters, electricians, drywall finishers and plumbers, who want to work inside and have guaranteed work every day.

“That's the key to our success,” he said. “If we can get the people, there is nothing we can't do.”

JCF Housements also wants to grow in the community. The company recently sponsored the kids' demolition derby at the Lincoln County Fair and sponsored a battery-powered car giveaway for one lucky winner.

“It was very exciting for JCF to have the opportunity to participate in this event at the fair. To us this was a big deal, "Blackwell said. “It couldn't have been any better.”

Kinchen said the company is currently looking to employees for input and involvement when it comes to helping the people of Lincoln County.

“We spent the first year getting the plant ready and starting production,” Kinchen said. “Now, we are shifting into the second year and we plan to start putting ourselves out in the community more.”

Blackwell said JCF Housements isn't going anywhere. “We're here for the long haul,” he said. “The factory will be here for many, many years to come. We have ambitions to build factories in other states, but this one will always be here. This will always be our headquarters where everything begins.”  JCF's corporate office is located in Spring Hill.

Blackwell said he couldn't be happier with Lincoln County, adding officials have worked hand-in-hand with JCF Housements over the course of the more than a year. He is grateful for the support.

“We are fortunate that JCF Housements made the decision to start their manufacturing company in Fayetteville-Lincoln County just over a year ago and become one of our industrial partners,” said Elaine Middleton, executive director of the Fayetteville-Lincoln County Industrial Development Board. “The company brings diversification to our industrial base and has generated many great job opportunities for local residents. JCF produces a unique product that serves the housing market across the Southeast region, and we are proud to have this product produced here in our community.”